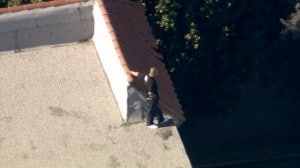 A man who led authorities on a chase at speeds of more than 100 mph on Monday from Santa Clarita to Culver City barricaded himself on the roof of an apartment building for more than three hours before surrendering.

The suspect’s name was not made public, but he reportedly was wanted in a drive-by shooting in Newhall and on suspicion of a drug-related crime. He surrendered about 5 p.m. after police used a diversionary flash-bang grenade and addressed him over a bullhorn to “put down that gun.”

At least one other person also was taken into custody at the end of the chase along Ballona Creek in the 9600 block of Lucerne Avenue. The driver plowed through a gate at a residential complex, and the white SUV he was driving was boxed in by pursuing officers.

At one point as the SUV zipped around traffic in Hancock Park, he backed into a parking garage out of view of police in helicopters and may have let out a passenger, possibly a woman.

It was unclear how the pursuit began, but it apparently started about 12:45 p.m. in Newhall, then led onto the 14 Freeway, the 5 Freeway and the 101 Freeway. With the chase carried live on television, the driver exited in Hollywood and led police into Hancock Park, running red lights and stop signs and sometimes passing stopped traffic on the wrong side of the road.

When the chase ended about 1:40 p.m., the driver fled into an apartment building and got onto the roof by a stairwell. He found a water hose on the rooftop to get a drink, then found some lumber and cinder blocks to barricade the stairwell door to the roof.

All the while, police from several departments and sheriff’s deputies surrounded the building.