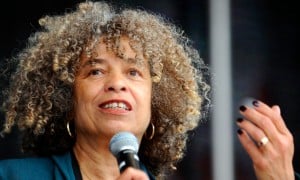 Free Angela is a feature length documentary about Angela Davis. The high stakes crime, political movement, and trial that catapults the 26 year-old newly appointed philosophy professor at the University of California at Los Angeles into a seventies revolutionary political icon. Nearly forty years later, and for the first time, Angela Davis speaks frankly about the actions that branded her as a terrorist and simultaneously spurred a worldwide political movement for her freedom.

Director Shola Lynch has been mining the rich terrain of black American history for a while now, notably in the award-winning 2004 documentary Chisholm ’72: Unbought & Unbossed, about the 1972 presidential campaign by the late Congresswoman Shirley Chisholm, the first African-American and the first woman to mount a serious, credible run for the office, and most recently with last year’s Free Angela Davis and all Political Prisoners, her soulful, illuminating documentary about the activist icon’s notorious 1971 trial on charges of conspiracy, kidnapping, and murder.

The Black Association of Documentary Filmmakers West (BAD West) is a professional organization providing people of African descent working in documentary film, video or other media the opportunity to network professionally, share resources, exchange ideas and meet socially in order to enhance the development, production, promotion and exhibition of documentaries. The Black Association of Documentary Filmmakers West also advocates the recognition and professional advancement of Black documentary filmmakers.

This event is FREE.