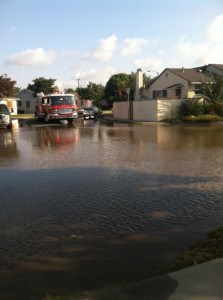 For the third time in four years, water is rising over the curb on McDonald Street in the Sunkist Park area of Culver City. Both Culver City Fire Department and Golden State Water are on the scene, attempting to discover the break so they can stop the water.

While the previous two water main breaks occurred in the early morning hours between 4 and 6 am, this break was mid afternoon, approximately 2:20 pm.

UPDATE – As of 3 pm, the water is being drained via manhole, and three section of underground pipe have been shut off, but the water is still rising. The break, according to CCFD firefighters on the scene, seems to be coming from Orville.

UPDATE – AT 3:40 pm, the water had stopped rising and was draining out through both the manholes and the storm drain at the end of the cul-de-sac. Golden State Water offered that the houses without water would be the end of the ecul-de-sac on Orville, where the original break had occurred.

This is the third water main break in Culver City in in the past week, with one occuring near Sony Studios and another in the neighborhood south of Sunkist Park bordering on Sepulveda.