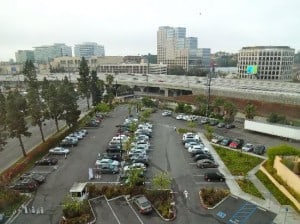 In a vote of four to one, the City Council kept the option open for the Carlyle Group to place billboards in Culver City.

The City Council meeting of Monday, Nov. 10, 2014 didn’t end until well into Tuesday, with a very large part of the evening taken up by the proposal for an “Hospitality and Entertainment District Plan” offered by the company PlaceWorks as representatives for The Carlyle Group.

The initial proposal for a ‘signage corridor’ was presented in June as a request to override the city’s ban on billboards by erecting ads that would only face out to the 405, and that was rejected by the council at the time. This proposal was greatly expanded to include the 90 freeway as well, and asks for more than twice the original amount of space on the 405 freeway. And even more – a ‘hospitality district’ would include amenities for the hotels adjacent to the freeway (The Doubletree by Hilton and the Courtyard by Marriott) and a host of alleged benefits to the whole community.

Woodie Tescher, the representative from PlaceWorks who made the presentation to the council, lauded the benefits of what this district could do – green space, walking corridors, connecting to the bike path – “You’ve just lost an ice rink? We could add in an ice rink. This will create a space for the kind of walking district that you already have downtown.” He spoke of “initiating a process” of ‘visioning’ to see what this plan could do for Culver City. Using the jargon of green urban planning to make the project sound as environmentally friendly as could be, Tescher presented the signage component as a minor factor.

The 19 Culver City residents who had come to address the council on the topic did not see it that way.

Andrew Leist quoted from the recent editorial in the Los Angeles Times, noting that ” Sign companies have proved again and again that they will sue over every new rule. And why not? Billboards and supergraphics that shroud buildings in ads are extraordinarily profitable, so fighting back in the courts makes financial sense for the companies.” He concluded that opening up Culver City’s ban on billboards would be an invitation for unending lawsuits.

Carlene Brown called the lack of integrity on the part of the Carlyle Group into open question. The Carlyle Group, a Washington D.C. based private equity global asset management firm has long been related to defense contractors as well as development investments. They have often been profiled for their noted connections to the Bush family. as well as the bin Laden family.

Susan Collins offered that “The word here is chutzpah. This project is 8 times larger than it was the last time the council saw it, and the length of freeway space in consideration has more than doubled.”

Considering the tremendous financial power that Carlyle has – over $170 Billion in assets – it made the final steps of the dance with the council on Monday night seem odd.

Only Mayor Meghan Sahli-Wells was set against it from the start. “It looks from my reading of this as if we’ve outsourced city planning.”

But her colleagues were caught up in the details of who would pay for what, how and when. With PlaceWorks set to provide half the sum for the ‘visioning,’ Carlyle was only offering to reimburse the city for the rest if the proposal were accepted.  Tescher was clear that PlaceWorks could not go their clients and ask for more funding, as there were a number of different businesses involved, and all would need to sign off on the increase.

Councilmember Andy Weissman was specific. “We are not going into this unless we know it’s not costing us.”

After more than an hour – beginning after midnight – of back and forth from the city staff, the council and Tescher, the motion that was voted on was that the city staff would use the funds available for ‘visioning’, and when they ran out, that process would be considered finished.

So, with only the mayor voting no, the process is still open for the Carlyle Group to raise billboards in Culver City, not just facing the freeway, but anywhere in the proposed  ‘hospitality and entertainment district.”