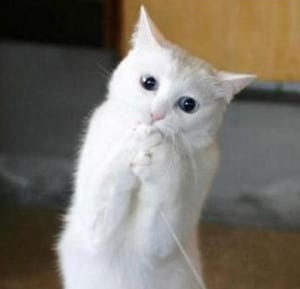 My wife and I were having an argument and we both said “potato canon” at the same time. She said “Jinx” first and now I can’t talk until someone says my name.

Meanwhile, my father in law is spewing his political rants all over my kitchen and I can’t tell him he is has a rutabaga for a brain. He thinks the grocery store tabloids claiming Michael Jackson and George Bush were Martian lovers is a “news paper.” Oh God, now he’s saying polio was caused by union agitators. Oh god, I can’t take it. I have to say something. He is telling my kids that God hates vegetarians. He is telling my wife I used to wear Goth make up and spoke only in limericks for all of tenth grade. I need to tell him to shut up! Make him stop talking now! Say my name Jethro! I’m going to bite my own tongue off. Jethro, what really happens if I talk before the Jinx is lifted? I’m about to rip his head off and scream down his neck.

If you speak before the Jinx is lifted, all the crazy stuff your father in law will be true.

Kidding! This is actually an awesome opportunity for you to practice Monastic Silence. In many religious traditions disciples take a vow of silence so that they may notice their own internal dialogue. Apparently once words fly out of our mouths they are instantly forgotten, like candy wrappers trailing behind a toddler dressed as Ebola on Halloween. But keep your comments trapped in your head and they turn into flying monkeys slamming into your skull and screaming “Dad you never loved me!” and “I have no soul!”

Once you stop being afraid of the flying monkeys and just watch them, like a motorcycle cage match, it gets fun. Every time your father in law says something stupid, watch the flying monkeys get their panties in a wad. Then when your kids look at him like he’s smarter than you, watch them stab your ego with tiny flaming pitchforks. You only feel like you are going to explode for about an hour. Then you’ll feel like the bottom dropped out of your brain. Then you’ll start to laugh. Its better than mushrooms, I guarantee it. Have fun!
​

Submit questions for Jethro via his website: www.TheAnswerCat.blogspot.com.
This column will be posted there one week after its publication here in the absolutely awesome Culver City Crossroads.
—
www.shellyblaisdell.com