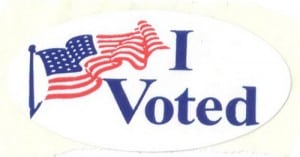 The day has arrived, and if you are not one of those organized people who already mailed in the ballot, you may have one sitting in front of you now, filled with names and empty bubbles, and not as much information as you hoped to have at this point. And you want one of these stickers.

It’s a long ballot, and there are some fairly contentious issues, but allow me to simplify for you…

Vote for Jerry – of course you are voting for Jerry. You did not need me to remind you. Jerry has saved the state after decades of poor governing, and I’m impressed and grateful.

Vote for Gavin Newsome – He is the only mayor of a major city (San Francisco) to have had both a female fire chief and a female police chief. Let’s open up the possibilities. And Lt. Gov. is pretty simple stuff – he hasn’t made any major mistakes so far, I’m willing to keep him there.

Secretary of State – Alex Padilla. I hate to see Debra Bowen go, but she’s termed out, and we need someone who can make a cause celeb out of getting voters to participate. Padilla is from Pacoima, and if Pacoima (and other cities like it) would turn out and vote we could truly make things happen for the people at the bottom of the economic ladder.

Controller – Betty Yee. I like Yee, and Swearengin reminds me of every blonde Fox newscaster who ever mispronounced some world leader’s name.

Treasurer – John Chiang – I have heard Chiang speak on two occasions, and he seems to have some very good ideas. That’s a definite bias – I like voting for people with good ideas.

Attorney General – Kamala Harris. Let’s give Harris a clean, easy win this time, ok? That last one was literally too close to call for weeks after the election. Harris has done a great job. Her ethics are so solid she has promised to support the law (death penalty) that she does not agree with because it’s the law. Imagine what our national health care system could do if all our elected officials had ethics like that.

Insurance Commish –  Dave Jones.  The Greenlining Institute gave Jones their 2012 Big Heart Award for his work promoting insurance industry diversity, and then he received the Distinguished Advocate Award from Autism Speaks. Again, imagine what our country could look like if we had people like that in all our elected offices.

Board of Equalization –  Jerome Horton. No relation to Tim or the donuts, but he has done a good job of putting government in the way of people profiting from gun smuggling and human trafficking. Remember, Al Capone went to jail behind tax fraud, not murder. Sometimes, paperwork is what counts.

37th District – Karen Bass. You weren’t thinking of not voting for Karen Bass?

30th District – Holly Mitchell. I want Holly to be President, or Governor, but right now, she’s doing a kick-ass awesome job as my State Senator. More please. (See above comments on Harris and Jones; if all of our politicians were as good as Mitchell, lives would be saved. Many lives.)

This is the space where I could be telling you to vote for Sebastian Ridley-Thomas, but I’ve got too many reservations. The personal stories I’ve heard from Culver City voters in regard to the member of the assembly – no recommendation on this one.

Supreme Court Justices – Vote YES for all of them. Nothing extraordinary here, good people with good records. Vote Yes.

Court of Appeal – Vote YES. Again, no big issues or challenges. Keep ’em on the bench. If you never think of Nora Manella or Dennis Perluss again, then they are doing a good job.

Superintendent of Public Instruction– Tom Torlakson – and this could be close race. Marshall Tuck has been pouring buckets of money into this for months, and he’s one of these ‘reformers’ who would like to privatize everything possible. I like public schools, I believe in public schools, therefore I am voting for Torlakson.

County Assessor – Jeffrey Prang I endorsed him in the primary, and I’m happy to do it again. Former WeHo city council and mayor, he’s a smart man with a solid sensibility.

County Sheriff – Jim McDonnell. I liked him in a much bigger field in the primary, and I still like him.  Not that I’m a huge fan, but he’s done a lot right and not much wrong. I know I’m biased, but it’s true – the Irish make good cops.

Da Props – Your Attention for Just a Another Crucial Moment, Please

Prop 1 – Vote Yes. The state of California has had next to no water policy. Considering it’s our most vital asset, that’s dumb. Prop 1 would give us almost eight billion in bonds; it’s a start. We need comprehensive statewide infrastructure for groundwater storage and ecosystem protection. This drought could continue for a very long time, and that makes all our lovely expensive real estate depreciate daily. Invest in protecting drinking water now, you’ll be really glad you did.

Prop 2 – Vote Yes. A Budget Stabilization Amendment is just the thing. Remember the decade- plus when the legislature couldn’t pass a budget even if we locked them in with no bathroom breaks? This is a way to pay off our debts, and create some long term savings. I can only think that those flyers claiming that it would hurt schools are by some group knowing that parents are the least likely to vote (because they don’t have time to do the research – and hey, they don’t want to hurt the schools) It’s about fiscal stability. Do it.

Prop 45 – Vote Yes. This is one to consider, because there’s an upside and a downside. The upside is that giving one office the power to hold health care costs is a good thing. But the other side is that Covered California is still just getting up and running, and they may well be able to take care of this without creating the additional office. So the risk is that we will end up with two layers of bureaucracy where only one is needed. The health insurance companies will need to fund the appointment, so there’s a risk that if we don’t have someone with solid ethics, corruption could be a short walk down the street. I want an insurance commish with the ethics of Kamala Harris and the vision of Holly Mitchell. I want the health insurance industry held to account, so I’m voting yes.

Prop 46 – Hell No. This is a prop written by lawyers and supported by lawyers to make more money for lawyers. It’s all over the map, trying to tie doctor shopping (patients are irresponsible addicts) and physician drug testing ( doctors are irresponsible addicts) along with the totally unrelated idea that people don’t get enough money in malpractice awards. They’d get a lot more if they didn’t have to fork over so much of their award to the already quite well paid malpractice lawyers. Hell, no.

Prop 47 – Vote Yes, Yes, Yes. Let’s get real – victimless, non-violent crime does not require a jail sentence. Our prisons are bursting with people who truly don’t need to be there. Potential savings in the “high tens of millions” of dollars – money saved goes to mental health, substance abuse treatment and school drop-out prevention. When this passes, we will be at the beginning of a road where we spend more money on education and therapy than on jail. Lives will be saved. Many, many lives.

Prop 48 – Vote Yes.  I love the idea that the people who spend money in casinos are funding the indigenous nations of California. We are not in any danger of being overrun by wealthy Native Americans. Build one wherever you like.

Prop P – Vote No. This is a ruse. Look at all those buzzwords in the title – “Safe Parks…Wildlife Protection….Beaches” It ‘s practically a toilet paper commercial. Prop P is for Pissing on Poor People. This is scheduled to take over the park funding now being provided by Prop A, which isn’t due to expire until next year, and there are still plenty of funds available. Prop A was not a flat tax, but one that taxed on a percentage of property owned. By making this a flat tax, I have to pay $23, you have to pay $23, and Disneyland has to pay $23. That does not work for me. If Prop P is passed, then we will ultimately have far, far less money to spend on parks and rec than we did under Prop A . Kill this and get a better proposition written for the next election cycle.

West Basin Water District – No Endorsement I’ve had a lot of information on both Scott Houston and Stephen Murray, and they are both smart, qualified and concerned about water.  Consider what Ed Little was able to accomplish with his time on the water board, and know that we need someone that forward thinking and ambitious to change the world.

Pencils down, and breathe –

Now, go look in a mirror and thank yourself for being part of a democratic process that your ancestors dreamed about. Call a few friends and see if they’ve voted yet. Share widely. If we get this together, we could have some smart, ethical leaders, the beginning of a water plan, people getting help instead of jail time, and someone to whom the health insurance industry is legally accountable to play fair.