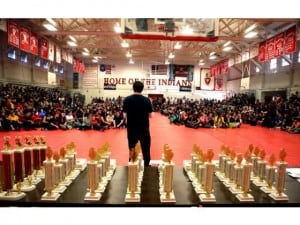 This Saturday, October 25th, a group of students from the theatre department at Culver City High School’s Academy of Visual and Performing Arts (AVPA) will be competing at a one-day theatre festival in Temecula. The DTASC (Drama Teachers of Southern California) festival is a way for students all over Southern California to perform scenes and monologues both for judges and for each other.

The students from CCHS will be performing three group scenes and two sets of monologues at the festival, and the community is invited to come see them perform a sneak preview tonight at the DTASC Showcase, Thursday, October 23rd, at 7:00 PM in the Sony Black Box Theatre, located to the right of the main entrance to the high school (4401 Elenda Street, Culver City) and to the left of the Robert Frost Auditorium.

Senior Sonya Broner and sophomore Eliza Spear will perform two contrasting monologues each. The three group scenes are all adapted, directed, and performed by the students, and are in the categories of Large Open Comedy (“Biloxi Blues,” adapted and directed by juniors Sadushi De Silva and Thanassis Tetradis), Large Open Drama (“Cat on a Hot Tin Roof,” adapted and directed by junior Samuel Petersen) and Musical (a compilation of musical numbers on the theme of betrayal, directed by juniors Paxton Amor, Raegan Harris, Claire Skelley and Khamiya Terrell.) The comedy and drama scenes have been cut from their original running time to under 8 minutes by the student directors. Due to some mature content, the evening is recommended for ages 12 and over. Admission is free, but donations will be gratefully accepted.

Come and see what’s competing, and get a taste of some first rate theater performances before they take to the road.