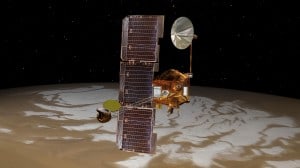 The longest-lived robot ever sent to Mars came through its latest challenge in good health, reporting home on schedule after sheltering behind Mars from possible comet dust.

NASA’s Mars Odyssey was out of communications with Earth, as planned, while conducting observations of comet C/2013 A1 Siding Spring on Sunday, Oct. 19, as the comet flew near Mars. The comet sped within about 88,000 miles of Mars, equivalent to about one-third of the distance between Earth and Earth’s moon. Odyssey had performed a maneuver on Aug. 5 to adjust the timing of its orbit so that it would be shielded by Mars itself during the comet’s passing, when computer modeling projected a slight risk from high-velocity dust particles in the comet’s tail.

“The telemetry received from Odyssey confirms not only that the spacecraft is in fine health but also that it conducted the planned observations of comet Siding Spring within hours of the comet’s closest approach to Mars,” said Odyssey Mission Manager Chris Potts of NASA’s Jet Propulsion Laboratory, Pasadena, Calif., speaking from mission operations center at Lockheed Martin Space Systems, Denver.

Three NASA Mars orbiters, two Mars rovers and other assets on Earth and in space are studying comet Siding Spring. This comet is making its first visit this close to the Sun from the outer solar system’s Oort Cloud, so the concerted campaign of observations may yield fresh clues to our solar system’s earliest days more than 4 billion years ago.

COMETS FOUND AROUND NEARBY STAR. A French team of astronomers at ESO’s La Silla 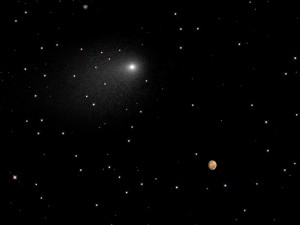 Observatory in Chile has studied nearly 500 individual comets orbiting the star Beta Pictoris and has discovered that they belong to two distinct families of exocomets: old exocomets that have made multiple passages near the star, and younger exocomets that probably came from the recent breakup of one or more larger objects.

Beta Pictoris is a young star located 63 light-years from the Sun. It is only about 20 million years old and is surrounded by a huge disc of material—a very active young planetary system where gas and dust are produced by the evaporation of comets and the collisions of asteroids.

For almost 30 years astronomers have seen subtle changes in the light from Beta Pictoris that were thought to be caused by the passage of comets in front of the star itself. Comets are small bodies of a few kilometers in size, but they are rich in ices, which evaporate when they approach their star, producing gigantic tails of gas and dust that can absorb some of the light passing through them. The dim light from the exocomets is swamped by the light of the brilliant star so they cannot be imaged directly from Earth.

To study the Beta Pictoris exocomets, the team analyzed more than 1,000 observations obtained between 2003 and 2011 The researchers selected a sample of 493 different exocomets. Some exocomets were observed several times and for a few hours. Careful analysis provided measurements of the speed and the size of the gas clouds. Some of the orbital properties of each comet, such as the shape and the orientation of the orbit and the distance to the star, could also be deduced.