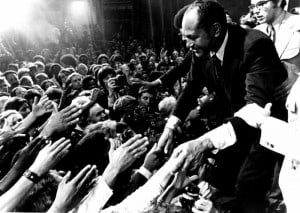 How did Los Angeles turn a cop into a mayor? How did Tom Bradley rise through the layers of L.A. to become the leader of an international city?

Tom Bradley’s story is a classic American success story; the grandson of slaves and son of sharecroppers who fought prejudice and bigotry to transform a major U.S. city, and in the process, transcends the barriers of race to realize the American dream. And yet, this film is far more important than a man and his dreams. Tom Bradley’s Impossible Dream is a 46-minute educational documentary. It is the story of the challenges of diversity facing cities and nations, and the decisions that we all must make.

Lorraine Bradley, daughter of Tom Bradley; Producer/Director/Writer Lyn Goldfarb; Producer/Research Director/Writer Alison Sotomayor and other members of the production team will be in attendance for a Q&A after the screening.

Lyn Goldfarb and Alison Sotomayor began the groundwork for the film while working on The New Los Angeles, an hour-long documentary, part of the 2006 national primetime PBS series, California and the American Dream. They were surprised to discover that there were no documentaries about Tom Bradley, no scholarly biographies, no in-depth filmed interviews with Bradley, nor any substantive interviews with his staff, colleagues, friends or family.

“Our goal is to ignite and renew a genuine interest in Tom Bradley – his life and legacy – and provide an opportunity for people throughout the city, state and nation to remember and celebrate the man who symbolized hope and a new chapter in race relations. We wish to tell the real story of Tom Bradley and restore him to his rightful place as one of the most seminal African American leaders of the 20th century.”
The Black Association of Documentary Filmmakers West (BAD West) is a professional organization providing people of African descent working in documentary film, video or other media the opportunity to network professionally, share resources, exchange ideas and meet socially in order to enhance the development, production, promotion and exhibition of documentaries. The Black Association of Documentary Filmmakers West also advocates the recognition and professional advancement of Black documentary filmmakers.

Lorraine Bradley, daughter of Tom Bradley; Producer/Director/Writer Lyn Goldfarb; Producer/Research Director/Writer Alison Sotomayor and other members of the production team will be in attendance for a Q&A after the screening.

This event is FREE.