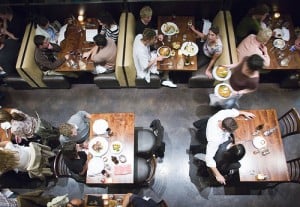 Keeping up with the local restaurant scene requires both stamina and stealth. Something called the North Beach Grocery may be opening soon downtown, while the Arts District has lost the Muddy Leek.

Closures result in partners going their own ways while new projects mean compelling new combinations. According to LA Eater, it’s Red Medicine’s Noah Ellis  and American Gonzo Corp’s Paul Hibler, (who co-founded Pitfire Pizza) getting together to take on the empty space at the corner of Culver and Duquesne

The duo is currently working on a food emporium at the upcoming in the former L’Epicerie space across from City Hall. The ABC listing shows North Beach Grocery as a possible DBA, which makes sense it lived its former live as a walk in and take out sort of spot.

At the moment, there are no further details on the project but the possibility certainly exists for a relatively quick transformation since the space was already built out for food service.

The New American restaurant Muddy Leek,  created by chef Whitney and Julie Flood, has closed just a bit short of their two year anniversary. News came quietly over the weekend as the restaurant served its last meal on Saturday, October 4 to a stream of neighborhood regulars who came out to say their goodbyes.