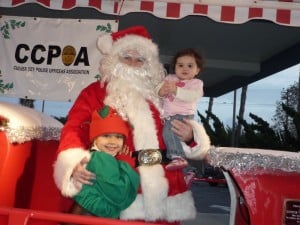 In the early 80’s, members of the Culver City Police Officer’s Association wanted to host an event that would create goodwill between the police department and the community. The Santa Sleigh was born out of an idea that the goodwill that Santa Claus builds transcends all races and religions. Since December of 1984, the C.C.P.O.A. has escorted Santa, his Sleigh, and helpers around the city streets of Culver City making the Santa Sleigh a true, unique, and multi generational Culver City tradition.

Weeks before Santa’s big night out, (aka Christmas) Santa and his Sleigh is escorted, code three – lights and sirens, by the Culver City Police Department’s custom show truck, black and white patrol vehicles, and police motorcycles.  The Sleigh is staffed by volunteers from the C.C.P.O.A., their families, and friends of the community; which is as much as a tradition as the Sleigh itself.

The operating costs associated with preparing/decorating the Sleigh, acquiring over 2000 individual gifts and 4000 candy canes each year is generously donated by the men and women of the Culver City Police Officer’s Association.  After 29 years of operation, the Sleigh is in need of refurbishment and is currently in the process of a complete and exciting makeover.

To help out, click on the link to www.gofundme.com/culver-city-sleigh