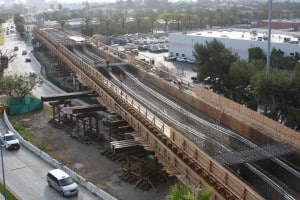 The Expo Line light rail extension from Culver City to Santa Monica is now 70 percent complete, the Expo Line Construction Authority announced at a community meeting this week. According to Neal Broverman at Curbed, the line’s seven stations are 63 percent finished; of the Santa Monica stations, the Twenty-Sixth Street/Bergamot station is farthest along. The platforms have been poured for the Seventeenth Street and Downtown Santa Monica stations, but the latter is more complicated as it’s the line’s last stop and will have to accommodate a crush of patrons (the city is working on a big public esplanade around the station). Track installation along the entire line will be finished this fall and the remainder of this year’s work will center around train control and traffic control installation, street improvements, and the installation of poles, wires, and station elements; testing should start at the beginning of 2015 and an opening could happen sometime next year or, more likely, in early 2016.

Photo of bridge over Cloverfield and Olympic Blvds courtesy of Source.Metro