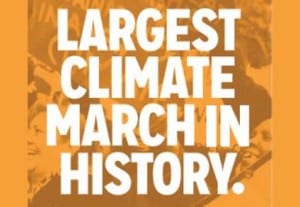 Now is the time to speak out and demand action action on climate change. Join Transition Culver City at the People’s Climate March LA. We don’t have to travel to NYC to make our voices heard – strive for carbon neutrality by joining dozens of community groups who will be marching along Wilshire Blvd. Saturday September 20, 2014.

The People’s Climate March (PCM) is an upcoming large-scale event to advocate global action against climate change, scheduled to take place on Saturday, Sept. 20 in Los Angeles and Sunday, Sept. 21, 2014 in New York City. Described as “an invitation to change everything,” the march was called in May 2014 by 350.org, the  organization founded by writer/activist Bill McKibben, and has so far been endorsed by “over 325 organizations, including many international and national unions, churches, schools and community and environmental justice organizations.”

Although based in New York, the event is intended to be global in scope and implication, and there will be “companion demonstrations” worldwide.Organizers intend the march to be “the largest single event on climate that has been organized to date… one so large and diverse that it cannot be ignored.”The entire PCM project will consist of “numerous events, actions, symposia, presentations, and more organized over the course of the days leading up to the Summit, and in the days following,” of which the march is intended to be “the anchor event.”

Taking the train: TCC folks will be taking the train from the Culver City Station (National and Washington Bl.). Meet on the platform at 11:45 am….train leaves at 12:10 pm.

If you would like to meet us at the march, we’ll be at the corner of Wilshire and Western, near the Metro station. Look for the Transition Culver City sign .. come on over and say hi.