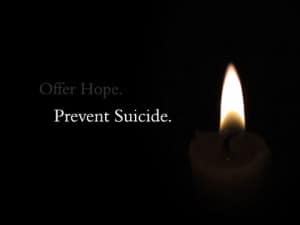 National Suicide Prevention Week for 2014 is set for September 8th through 14th.and the City Council will be honoring Dr. Kita Curry of Didi Hirsch Mental Health Centers for her efforts.

Approximately 987,950 American attempt suicide each year, and it is estimated that five million living Americans have attempted to kill themselves. An estimated 4.8 million Americans are survivors of suicide of a friend, family member, or loved one.

Many people at some point in their lives think about suicide. Most decide to live because they eventually come to see their crisis is temporary while death is permanent. But the will to live can be drastically affected for people experiencing unbearable anguish or stress. Perhaps they are living with mental illness or they are suffering from the loss of a job, a loved one or a relationship. Whatever the cause, when people feel totally alone and hopeless about their future, they may begin to regard death as preferable to life.

The good news is that most people who are thinking about suicide decide to live. Somehow they find ways to cope with the pain they are experiencing. The staff of the Suicide Prevention Center believe that the best way to prevent suicide is to provide a safe and comfortable environment for people to talk about how they are feeling without being judged.

The Suicide Prevention Center (SPC) offers a 24-hour crisis hotline and daily chat services for those who are thinking about suicide or worried about someone who is. Individuals who have lost someone to suicide can also call to discuss their feelings or join a Survivor After Suicide support group. SPC also offers support groups for those who have attempted suicide or are dealing with persistent suicidal thoughts. SPC also provides educational workshops on suicide.

Want to help Didi Hirsch continue helping those in crisis? The annual Alive & Running 5 K to support the Didi Hirsch Suicide Prevention Hotline will take place September 28, 2014, just north of LAX at West 88th St and La Tijera. Now is the time to sign up to run, volunteer, or get donations to support the 24-hour Crisis Hotline. The walk/run is a family event with Taiko drummers, and also features a kiddie 1K walk.