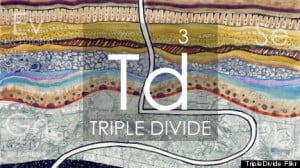 “TRIPLE DIVIDE” A Fracking Documentary will be offered as a free screening on Monday August 25, 2014 at the Vets Auditorium at 8 pm.

Triple Divide is said to be the only documentary of its kind on the controversial subject of fracking capable of speaking to all sides, with exclusive interviews from the industry, experts, and Americans suffering in the wake of shale gas development. “It’s the best movie on fracking to date [using] facts, not fiction or spin” wrote Pennsylvania resident, Robert Donnan. Academy Award nominated actor Mark Ruffalo co-narrates the film, taking part in the project after being shown an online screener a few weeks before the final release. The film is co-directed by journalists Joshua Pribanic & Melissa Troutman.

The 90-minute documentary is a project by PublicHerald.org, a Pennsylvania based nonprofit organization. Triple Divide is built on evidence from cradle-to-grave investigations that attempt to answer the question, “How are state regulations and industry handling impacts from fracking?” Throughout the film’s 10 chapters, which cover waste, class II injection wells, drinking water contamination, split-estates, the “pre-drill test scandal”, and the “pressure bulb” are on the ground accounts of hair-raising journalism.

Pribanic and Troutman’s documentary Triple Divide explains thoroughly the process of hydraulic fracturing, the industry ‘s tactics in procuring sites for fracking, the state of Pennsylvania’s failure to enforce its overly adequate fracking regulations, the repeated violations of energy companies, the financial ties between the energy companies and regulatory agencies, and the devastating effects fracking has allegedly had on the water in Pennsylvania.  While numerous energy companies have provided water for families whose wells have been allegedly compromised from fracking, the companies deny that the water was affected by the fracking process and call their water provisions a “good neighbor” act.  While Pennsylvania’s Depart of Environmental Protection has supported the fracking companies’ claims that  water is not affected by hydraulic fracturing, a Duke University study  implied that the high thermogenic methane presence in many of Pennsylvania residents’ wells is a result of fracking.

Please RSVP to secure seats as room size is limited to: [email protected]

Filmmakers will be present for a panel discussion after the screening