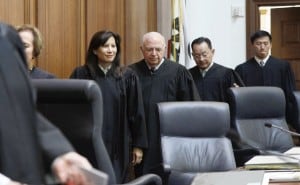 California Supreme Court on Monday effectively blocked a November advisory ballot measure on the merits of unlimited independent campaign spending, dashing some Democrats’ hopes that the measure would boost voter turnout in what could be an otherwise staid election.

Approved by the Legislature early last month and grudgingly allowed to go on the ballot by Gov. Jerry Brown, Proposition 49 would have asked California voters if Congress should overturn the U.S. Supreme Court’s controversial Citizens United ruling in 2010. The legislation’s passage followed Capitol protests that triggered dozens of arrests.

But in siding with the Howard Jarvis Taxpayers Association, a 5-1 high court majority said it needs more time to consider whether the advisory measure can be placed on a California ballot.

“It’s pretty chilling when the judicial branch cancels an election where the people are likely to vote against the judicial branch,” Derek Cressman, a spokesman for the “Money Out Voters In” campaign, said of Monday’s Proposition 49 decision. “It’s what we’ve come to expect from oligarchs in Russia, but not what we’d expect in our republic.”

In a concurring statement, Associate Justice Goodwin Liu said any California ballot measure “must take a distinctive form: it must take the form of law.”

“Our Constitution makes no provision for advisory questions because such polling of the electorate by the Legislature is in tension with the basic purpose of representative as opposed to direct democracy,” he wrote, adding that the constitution does not allow a “mix and match” approach of binding laws and advisory measures going before voters.

“If the Legislature wants to commission Gallup to do a poll on Citizens United I see no problem with that,” Liu wrote. “But there is a difference between doing that and doing what the Legislature has done here.”

In a dissent, Chief Justice Tani Cantil-Sakauye objected to what she called her colleagues’ “extraordinary step” of blocking Proposition 49 from going before voters. Cantil-Sakauye said the court should have let the measure stay on the fall ballot and considered its legalities afterward.

“I do not see such a clear showing that the Legislature lacks authority to place the measure before the voters, warranting this court taking the extraordinary step of removing the measure from the ballot, thereby disenfranchising the voters,” she said. “The stay also deprives the voters of the ability to express their views on the subject at the time when the issue is being hotly debated, as opposed to two years from now, on the ballot of 2016.”

The Howard Jarvis association had argued that Proposition 49, based on Senate Bill 1272 by Democratic Sen. Ted Lieu, amounted to an “illegitimate exercise of legislative power.” Lieu, though, called the court’s decision “bizarre” and said it “silenced California voters from having their voices heard.”

“It was a very activist order,” Lieu said, adding that he was confident the question would go before voters in 2016.

Attorneys for the Jarvis group had cited another advisory measure that qualified for the ballot 30 years ago and was challenged, determined to be inappropriate and removed by the California Supreme Court.

The group characterized the latest measure, which passed on party-line votes, as a “cowardly” attempt by Democrats to drive up voter turnout in the fall. On Monday, Coupal pointed to Brown’s comments when he allowed SB 1272 to become law without his signature.

In a non-signing statement, Brown wrote, “We should not make it a habit to clutter our ballots with nonbinding measures as citizens rightfully assume that their votes are meant to have legal effect. Nevertheless, given the Legislature’s commitment on this issue, even to the point of calling for an unprecedented Article V Constitutional Convention, I am willing to allow this question to be placed before the voters.”