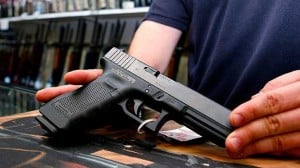 Assemblymember Sebastian Ridley-Thomas’ measure to enable the California Department of Justice to accurately cross-reference records from the Armed & Prohibited Persons System (APPS) and the Consolidated Firearms Information System (CFIS) databases has been signed into law by Governor Jerry Brown.

Assemblymember Ridley-Thomas said, “When guns are in the hands of persons who’ve been prohibited from owning or possessing a firearm Californians are placed at greater risk of serious injury or death from a firearm. The APPS and CFIS system work best when our DOJ agents are able to effectively track those persons who are in the state and federal databases of persons who are banned from owning or possessing a firearm I’m pleased Governor Brown signed this important measure into law.”

Assemblymember Ridley-Thomas’ bill (AB 2300) was intended to aid DOJ agents in working to ensure that firearms are not remaining in the hands of persons who have been prohibited from owning or possessing a firearm. In 2011, Department of Justice agents seized more than 1,209 firearms and nearly 156,000 rounds of ammunition from individuals who had been banned from owning or possessing firearms.

“California’s firearms statutes are designed to prevent firearms from falling into the wrong hands and to protect the rights of lawful gun owners,” Attorney General Harris said. “AB 2300 supports our work to keep our communities safe and illegal firearms of our streets. I thank Assemblymember Ridley-Thomas for introducing this important legislation and Governor Brown for signing it into law.”

The measure enables DOJ agents to cross-reference APPS and CFIS firearm purchase and possession records dating back to 1996. If a person was legally able to own a firearm in 1996, but was subsequently banned from owning or possessing a firearm in a later year, DOJ agents can contact that person to take possession of the banned firearm. Assemblyman Ridley-Thomas’ measure was sponsored by California Attorney General Kamala D. Harris and supported by the California State Sheriffs’ Association.