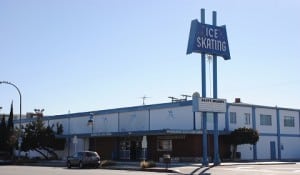 At the Council meeting on July 28, the five ayes that voted to grant ‘historical significance’ to the Culver Ice Arena were all aware that what they were bestowing was a title, and not the power to re-open the rink. What is conferred by the designation of historical significance is simply an acknowledgement that this meets the standards set by the state. That it just barely meets the standards set by the state, and that those standards are rather arbitrary were all topics discussed by the council and the people who came to comment.

As Mayor Meghan Sahli-Wells noted at the beginning of her remarks, “Borrowing a phrase from my fellow mayor Garcetti, The Ice Arena is a big ‘effing’ deal.”

The action item on the agenda began with consultant Jennifer Trotoux from Architectural Resources Group  presenting the standards and evidence by which the rink could be considered to be historically significant.

“There are three sets of standards, all of which closely follow each other; federal, state and historical. The state standards are directly parallel to the federal standards, to make it easier for places to get into the National Historical Register. Is the site associated with an historical event, a person, or does it have architectural or archeological significance?”

Using a system of 40 possible points, with scale of 21 to 40, he Ice Arena qualified with a score of 25 – significant, but not Significant.

Council member Andy Weissman pointed out that some of the attributes which had scored points – being the only ice rink in Culver City, having a sign that is visible from the street – were not really extraordinary.

While 13 speakers addressed the council with their passionate hopes that the rink could re-open, Council member Jim Clarke noted that what happened on the property was up to the owner of the property [Mike Karagozian] and that in his most recent conversation with him, the owner he had no intention of continuing the use as an  ice rink.” It might turn out to be a grocery store or a tire store, we just need to recognize that historical status does not override ownership.”

While it was noted that the Los Angeles Kings hockey team, (former users of the Ice Arena)  had made an offer as recently as July 11, there seemed to be no interest on the part of the landlord.

Council member Mehaul O’Leary stated “Our decision today will have no effect as to if or when the ice rink returns.”

So, with five ayes, the council voted to grant the rink ‘significant historical status.’ What that will mean for the future of ice skating on Sepulveda Boulevard is still to be considered.