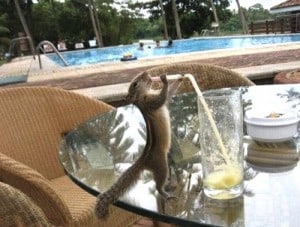 It was late summer, 2006. All the chairs were claimed, so I let her sit under my palapa. We were lonely strangers, both wanting to escape reality. We flirted and played games while drinking Piña Coladas. We made up silly identities. I told her I was an astronaut preparing for a trip to Mars. She told me she was an escaped felon facing extradition. What a creative spirit! I loved her instantly. She said she would come back to me just as soon as her aunt in Bogota recovered from bunion surgery. I’ve been here in this resort for 8 years now, Jethro. I told the FBI agents that they were mistaken: the package she asked me to deliver was light bulbs for the orphanage. I’m running out of money. If I cancel those credit cards she borrowed, will it send the “wrong” message to her?

She’s not coming back. And you know it. I think you just keep telling yourself that story so you can continue drinking.

I found this awesome feathered scratching post behind the couch at my neighbor’s house. 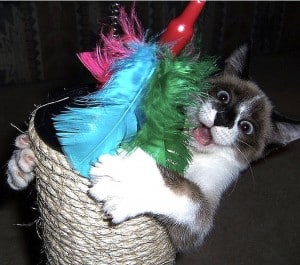 Can I keep it? It was just sitting there, no one was there saying “Hey, that’s mine.” Their upstairs window was wide open, so it was totally fair game. And the other cat that lives there already has a million marabou squeaky mice. Besides, he’s an entitled jerk who sneaks in MY cat door in the middle of the night and steals MY catnip and shreds MY Dog Fancy Magazines. I think this guy has a drug problem. Once he even took a ham sandwich that I’d hidden in the laundry room. He doesn’t deserve a cool feathered scratching post like this. It took me three hours to get it down the stairs and out the cat door, so I WORKED for it. It’s mine now. What kind of a cat breaks into his neighbor’s house, steals their drugs, AND eats their ham sandwich? I deserve this more than he does.

Pay Back is a Bee-otch.