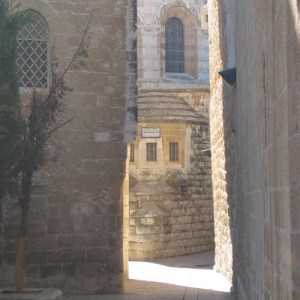 Since I arrived in Jerusalem, I have found myself in a state of constantly slipping on stones. I don’t wear regular sneakers, and my Skechers are only reserved for dancing, and the series of Israeli-made sandals I brought and bought on this trip are not grip-worthy enough to avoid walking around like I’m 80 instead of my spry 55-year-old self.

I am staying a thirty-minute walk from what is referred to as the “Old City,” which is not just old, but ancient, in parts, and looks like a set from Game of Thrones from afar. As people walk the stairs to the Baldwin Hills Outlook for their constitutionals in Culver City, I have had the honor to ascend the steps to the Zion Gate of Jerusalem several days in succession.

I ascended day one and just ended up having a “lafa sandwich” dinner (you can get one of these at The Hummus Bar on the 3rd Street Promenade in Santa Monica), because it was too late to do much shopping or sightseeing. Still, just before dusk, I was able to take what now has become my new Facebook profile photo, with a perfect view of Jerusalem in the background. The next day, I made it there early, to go on the famous and infamous underground tunnel tour. Finally, I went in again, but through the curiously named Dung Gate, having gone up via the underground aqueducts from the historically significant Gihon Spring, around which life in Jerusalem began from pre-historic times. Jerusalem is located at the top of a mountain, so you always use the word “go up,” the same word used for going up to the pulpit to recite prayers or make a speech during sabbath services, and the word used when Diaspora Jews decide to make Israel their home.

When you slip on stones, you feel like you might lose your balance, it’s a precarious feeling, the way Jews have some times felt when away from their homeland, as Sholem Aleichem said, “like a fiddler on a roof.” Personally, when confronted with the fact that your passion and energy daunts others so profoundly, that they seek to escape you, or even undermine you rather than be drawn to you and your accomplishments or be motivated by them, you feel emotionally like you are slipping on stones. You say to yourself, “hey, wait a minute, maybe I shouldn’t be expending this much effort if it isn’t going to be appreciated.” You give up. Instead of taking yet another confident, assured step, you realize that it is time to pull back, hold into the handrails, recalibrate, and, when you are ready, reinvent.

Like the history of the Jewish people, who have had to reinvent and restart our culture many times, we cling on to our basic ideals and beliefs, but we have taken them on the road from Jerusalem to Babylon to Egypt to Rome to Spain to Germany to Poland and back. Personally, I’ve done the same, from college days at UCLA, to married life in Japan, to single years In Los Angeles at American Express, back to another set of different married years in Japan as an executive, to motherhood and continuing my career in travel in Los Angeles, to changing careers altogether a little over ten years ago. Maybe my life mirrors more my ethnic Jewish heritage more than that of my adopted Japanese background, a country and culture that prides itself on being homogeneously in the same spot, while Jews have been moving to and fro.

Israel is remarkably different from anywhere else in the world. Maybe that’s why I feel so comfortable there. As a person who consistently finds myself in the minority opinion in most situations, thinking differently, marching to my own drummer, I relate to Israel. Israel is also a nation alone, occasionally supported by other nations for ulterior motives, but most of the time going it alone, surrounded by those who disagree with their way of life and beliefs. Sometimes I feel like I am Israel.

As a travel destination, Israel cannot be beat as THE destination of choice for history, for recreation, for relaxation. It is really such a shame that my father chose not to come here. I spoke previously of the fact that he opted out of joining my mother and sister and I on our 1982 “Holy Land” tour out of Milan, Italy. As I ponder why he refused to come, I realize that I don’t really know what he thought of Israel through his life, during which time the modern state was established. Anybody who knew him knew that he was an evangelistic atheist; perhaps he felt it was too religious a country. He also was a Germanophile; I am not sure how or if that influenced his views. He cared deeply about what was important to him: less government (he was a card-carrying Libertarian), lower taxes, his work in the computer field (he taught us, “you have to love your work like it is a hobby”), and his own particular and peculiar hobbies, which included chess, bridge and later, poker, reading and, when younger, folk dancing.

My father also loved to travel, and instilled wanderlust in my sister and I. My sister lives two blocks away from me here in Culver City, but most of our quality time is spent traveling as a family within California with our children. In spite of himself, my father would have loved the Israel of today, with its outdoor cafés, Mediterranean vistas, green mountains and valleys (we are talking about a desert, by the way), and it’s not only world-class, but trend-setting, ground-breaking ideas and ideals.

But Israel suffers so much, not as much from bias, as from uninformed worldwide opinion. People spout off about Israel, thinking they know anything, without ever having been here. Entire organizations, from college campuses to religious bodies, take stands against this country by what we call “BDS (boycott, divestment, sanction),” the world’s newest form of anti-Semitism. I visited a winery here that uses French oak and Italian bottling systems, and asked, “Do you ever have trouble getting companies to work with you?” He answered, “Of course not! We come with money, and money talks.” When I pressed further, however, he admitted that they for some markets, Denmark was one named as I recall, they needed special labels to cover the terroir of the wine, in order to sell.

So much of the negativity, I have found, is based on third-party information and special interest group rhetoric. No matter what anyone says, the situation here, although relatively peaceful at the moment, is complicated. It is so complicated that the greatest minds of our day, from politicians to pundits, cannot get their heads around it.

I arrived here two days after three teenagers were abducted by Hamas terrorists. As an inquisitive person let loose in a country of highly literate people who love to talk, and love to argue, I have had many conversations, and heard many viewpoints. For every ten people met, ten new viewpoints march through any I thought I’d formulated.

We just heard the news that the boys were found to have been murdered. We are mourning their loss, and the loss of confidence that peace can ever happen with people who think that political aspirations can be achieved by killing innocent youth. Or, maybe they are right, given the outpouring of support they receive at our ally Israel’s expense, on a regular basis, even from educated people. If the boys had simply been abducted by someone mentally disturbed, as happens in the United States, the Palestinian Authority, and even Hamas, could have used the opportunity to assist Israel in finding the boys; Capulets and Monteques, Jets and Sharks, walking together into the future. Instead, Hamas applauded what happened. Instead of a willingness on both sides to put the past behind and start a meaningful dialog about the present and future, Israel’s opponents worry about something called “normalization.” Meaning, if they act like everything is “normal” in order to move forward, their belly-aching about the past might be left to the wayside and forgotten.

In my life too, I’ve weathered a few disappointments lately, and part of me wants to protest, to not proceed with business-as-usual, not “normalize” lest my objections to the way I’ve been treated be forgotten. On the other hand, I want to be more like Israel in this way too; Israelis are the first to say to me, “why DO you carry on about the Holocaust so much?” When I answer that I want to understand better, so that I can do my part to ensure that it never happens again, I think an Israeli would tell me that Israel is already the embodiment of hope, and it’s existence guarantees that a Holocaust could not ever occur again. As if by example, people in Israel spoke of recent increased immigration from France, the country with the highest incidence of anti-Semitic acts in recent years.

In Israel, there is no time to waste; every day must be valued and lived to the fullest, no matter what anybody else thinks. I have come back taking this message to heart.