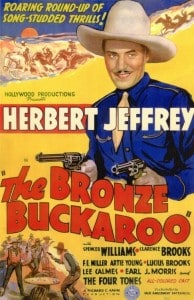 Black Talkies on Parade remembers pioneering actor and singer Herb Jeffries born Umberto Alexander Valentino (1913-2014). Mr. Jeffries career began during the 1930’s performing with genius artist Duke Ellington. By 1937 Jeffries made his film debut with Harlem on the Prairie. Within a short period of time Jeffries was referred to as the “Singing Cowboy”. The Bronze Buckaroo is a 1939 American film directed by Richard C. Kahn. It is one of a number of race films made by African-American directors and performers for African-American audiences. At the conclusion of the feature there will be an audience discussion led by film scholar, Les Willis. MCLM’s Executive Director, Lloyd J. Clayton will be the Master of Ceremonies. This Saturday June 28 at 4 pm-