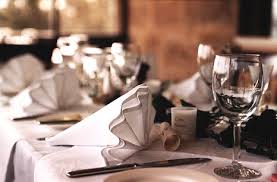 I know this may sound like some middle-aged woman’s rant: Having some table manners makes a difference in how others view you and could influence your future opportunities. Table manners are a reflection of how you view yourself and how you view others. “Like table manners” may attract “like people.”

My mother had perfect manners as far as I could tell. And I HATED the manners rant when I was growing up, but she tried not to make my lessons too severe. When I got to college I realized that my table manners as flawed as they were, were so much better than my peers in the college commissary. I was shocked at what I saw. I came home and thanked my mother.

My former acting-major roommate will tell you that one time when she and I were eating, she was using her hand as an eating instrument and I reached over and hit her hand. I know…What made me do it? I looked at her and said, “Someday when you are at the Academy Awards and the camera zooms in on you, you’ll be glad I stopped you from eating like that!” (Okay I wasn’t quite as accepting then…and I had other manners issues…like boundaries…laugh.)

The other night I was out with my in-laws at a family style italian restaurant. Prices of entrees are about $15. I noticed a family of overweight people enjoying themselves, the parents, their college aged daughter and the daughter’s boyfriend. The daughter was the only one eating at this point. She was eating a chicken filet dish. She stabbed the chicken and held it up to her mouth as she took bites all around the filet, holding the fork upright as if it were a pole. As she is chewing her mouth is open the whole time, laughing, talking and chewing, never a thought to closing it as she chewed. The next piece she took was bigger than her mouth, and she stuffed it into her mouth in one bite so she couldn’t even close her mouth. The bite was so large that it made her cheeks poke out on either side. She decided to cut the next piece by holding the fork like she was plummeting it into an opponent-fist-like around the fork handle.

This was a loving family having a nice evening out, but they were very overweight, wearing tee-shirts, too casual for this type of restaurant. I perceived a sort of “gave-up” attitude in their appearances.

I wanted to go up to these parents and shake them. When did manners go out the window as something of value we teach our children? I wanted to tell them, “Look your overweight daughter is already limited in her career choices and her perceived value because of her weight. The weight is obviously something that is a problem within the family. However being overweight and then having lousy table manners determines that if any co-workers eat with her, if any future boss sees her, they may not promote her. Table manners is a sign of being civilized, of caring about yourself and those eating with you. In a world of tough competition for wages, table manners could matter.”

I have two boys. Table manners is an on-going issue within my family. We work on it all the time. My boys are still not with the program, but I never give up. Even with their needs, it’s still important (maybe even more so) that they be able to eat nicely with others. Without decent table manners, it further limits their abilities to make connections within a social world.

We do live in a social world. That world, whether we like it or not, sets certain standards of behaving within the world. I teach my boys to hold the door open for the next person. I say, “Please and thank you” with sincerity. I try to choose kindness first when there is a problem. These standards help us navigate the difficulty of living with other humans on the planet.

Manners have gone missing in our world. Not just table manners, but all sorts of manners and people feel more entitled to do what they want which impacts everyone else. Civilization has to agree on certain ways of behavior in order to get along with everyone’s needs. In the United States, perhaps table manners is a small but important way to start thinking about yourself and others.