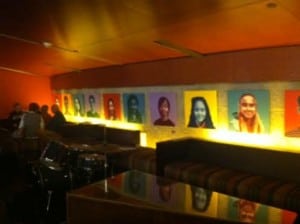 Saturday, June 7 at the Kirk Douglas Theater saw the annual AVPA year end celebration packing the theater with inspiring artworks, and parents and students happy to put the crowning touch on a great year.

The always welcome Jazz Band played in the lobby as AVPA admirers enjoyed the presentation from Visual Arts, and the Warhol- style portraits of the students were the signature logo on the cover of the program.

Starting the performance with “Another Openin’ Another Show” from Kiss Me Kate, the Spring musical, gave the vocal ensemble a perfect point of punctuation to kick off the festivities. The first year students from the respective departments gave the audience the official welcome, and the theme for the show, ‘Our Time.’ Samantha Koyama represented the Art department,  Katy Engel spoke for Dance, Jacob Cravens-Meza introduced Film, Peter Marcus gave words to Music, and Gabe Lobet performed for Theater. They showed the co-operative spirit.

The presidents and co-presidents of each department came to the podium in turn to introduce their work, and talk about what the departments had achieved in the year, accompanied by slide shows of AVPA students creating.

With a field that varied from Bernard Hermann’s iconic “Psycho – Suite for Strings” by the String Ensemble, directed by Dr. Tania Fleischer, to a dialogue from Shakespeare’s “Midsummer Night’s Dream” with Monika Elmont asHelena and Lizzy Ferreria as Demitrius, the eclectic evening turned through film, dance, art, and music at a swift pace.

Alex Cerutti of the Art Department spoke about the Memory Project. A multi-school initiative to give orphans a self-portrait, the AVPA matched artists with photos and then sent the finished portrait to the orphans as a symbol of friendship and connection, and how art changes the world. “I hope that when he looks at his portrait, he knows that I care,” said Cerutti “and that it makes things a little better.”

Short films played though the evening, small samples of the great work being done in the Film department, and student leaders Jaenell Cowart, Mahelet Gezachew, Nathan Jimenez and Maddie Silva described their film premieres at Sony Pictures Studios on an evening earlier in the year.

The Theater department let sail the USS Improv, two teams of competing actors who called for audience suggestions and left everyone laughing with their spontaneous wit.

The Dance department took the stage for six different dances, each one as accomplished and polished as the choreographers and performers that brought their ideas into motion.

Closing with Stephen Sondheim’s ‘Our Time,’ all the AVPA students, including the stage techs still wearing their signature black clothes and earpieces, filled the stage completely to sing together.

Every school should have an arts program as vibrant, as powerful and as innovative as the AVPA, but Culver City High School is lucky to actually have this Academy, and all the parents and sponsors who support it, and all the students who shine.

Congratulations to all who gave their time for ‘Our Time.’