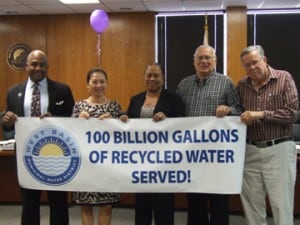 On Wednesday, May 28, the West Basin Municipal Water District (West Basin) Board of Directors elected new officers as a result of the retirement of its current President and long-time Division IV Board member Edward C. Little. Taking over as Board President is Donald L. Dear, former Vice President. Gloria Gray was elected the new Vice President, Ronald C. (Ron) Smith remains the Treasurer, and Carol W. Kwan is Board Member of Division III.

Edward C. Little retired effective May 20, 2014 having served since 1989. Director Little has been credited for his vision and leadership of the Board of Directors and was instrumental in the development of the state-of-the-art water recycling facility in El Segundo, CA and to diversify the agency’s water portfolio to not only include wastewater recycling, but water conservation and more recently ocean-water desalination. In 2007, to honor Director Little’s leadership and vision, the Board of Directors renamed the El Segundo water recycling facility the “Edward C. Little Water Recycling Facility.”

To fill the vacancy left by the retirement of Edward C. Little, the Board of Directors is soliciting candidates for an interim appointment to Division IV Director. Candidates interested in the appointment must live and be registered to vote in the Division IV service area consisting of the Cities of Culver City, El Segundo, Malibu, and West Hollywood and a portion of Lennox, North Ladera Heights, Del Aire, Topanga, View Park and Windsor Hills. Desirable candidates will have an interest in local, state and regional water issues; knowledge of the legislative process; proven ability to work with local communities; and a history of community leadership.