NASA’s orbiting Chandra X-ray Observatory has revealed a spiral galaxy similar to the Milky Way glittering with hundreds of X-ray points of light.

The galaxy is officially named Messier 51 (M51), but often goes by its nickname of the “Whirlpool Galaxy.” Like the Milky Way, the Whirlpool is a spiral galaxy with spectacular arms of stars and dust. It is located 30 million light-years from Earth, and its face-on orientation to Earth gives us a perspective that we can never get of our own spiral galactic home.

The new dataset, equivalent to about 900,000 seconds of Chandra observing time, reveals nearly 500 X-ray sources. In this composite image, the X-ray sources are shown in purple. Optical imagery from the Hubble Space Telescope, shown here in red, green, and blue, has been added.

Most of the X-ray sources are X-ray binaries (XRBs). These systems consist of pairs of objects where a compact star, either a neutron star or, more rarely, a black hole, is capturing material from an orbiting companion star. The infalling material is accelerated by the intense gravitational field of the compact star and heated to millions of degrees, producing a luminous X-ray source.

A difference between the Milky Way and the Whirlpool Galaxy is that M51 is in the midst of merging with a smaller companion galaxy (seen in the upper left of the image). Scientists think this galactic interaction is triggering waves of star formation. The most massive of the newly formed stars will race through their evolution in a few million years and collapse to form neutron stars or black holes. Most of the XRBs containing black holes in M51 are located close to regions where stars are forming, showing their connection to the oncoming galactic collision.

MEANWHILE, BACK IN THE YEAR 1845, an Irish gentleman and amateur stargazer named Lord Rosse was also observing the Whirlpool Galaxy. At his estate, Birr Castle in Parsonstown, County Offaly, he had built what was then the world’s largest telescope, with a mirror an amazing six feet (72 inches) in diameter, dubbed “the Leviathan.”

He had to invent many of the techniques he used for constructing the Leviathan, both because its size was without precedent and because earlier telescope builders had guarded their secrets or had simply failed to publish their methods. Building of the Leviathan began in 1842 and it was first used in 1845; regular use waited another two years, due to the Great Irish Famine. It was the world’s largest telescope, in terms of aperture size, until the early 20th century. 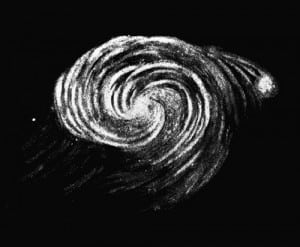 nebulae, discovering the spiral nature of some that are today known as spiral galaxies. In particular, his Leviathan was the first to reveal the spiral structure of M51. As astronomical photography was unknown in the 1840s, he had to record what he saw in sketches—and his drawings of the Whirlpool Galaxy closely resemble modern photographs.

Lord Rosse’s historic Leviathan telescope, a major monument in the history of astronomy, has been preserved and is still accessible for public tours. For information see:
www.birrcastle.com/things-to-do-in-offaly/the-great-telescope/info_12.html.