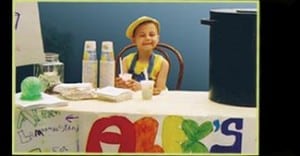 The children of La Playa Cooperative Nursery School have squeezed their hearts out and made lemonade to sell in order to raise money to fight pediatric cancer. Come out and buy a glass, support our kids and give to a fantastic cause. Come by Lindberg Park between 10:30 and noon on Friday June 6 and have a cold one. You’ll be adding in to a foundation that has spent the last decade working on this cause, and you can help to teach Culver City’s children that when we all work together, we all benefit.

How did Alex’s Lemonade Stand get started? Two young girls arrived at Children’s Hospital of Philadelphia 11 years apart with the same kind of cancer. One, 4-year-old Edie Gilger, lived to see her tumors shrink because of an innovative new drug therapy. Edie is in complete remission.

For that, she can thank the other girl, Alexandra Scott; the Alex of Alex’s Lemonade Stand (see photo above)

Ten years ago this month, Alex, weakened from cancer, sold lemonade for the last time at her elementary school. Lemonade stands were her way to raise money for doctors “to help other kids, like they helped me.”

By the time Alex died that August, the girl had raised nearly $1 million and set in motion what would become an international effort.

Alex’s Lemonade Stand Foundation for Childhood Cancer has since raised more than $80 million, funded more than 450 research projects, and played a role in the discovery of innovative therapies for children with cancer.

Researchers say the foundation has delivered key funding at a time when federal money is dwindling, helping to develop treatments that have shrunk tumors in some children, and helped further research into how a patient’s own immune system might attack cancerous growths.

Once limited to a single full-time staff member, the nonprofit now employs 30 people focused on the mission of eradicating childhood cancer “one cup at a time.”

This weekend, more than 2,500 lemonade stands – including one at Lindberg Park – will crop up across the nation and in Canada for National Lemonade Days, organized annually by the foundation. The goal: to raise more than $1 million over the weekend for pediatric cancer research – to help more children the way Alex already has helped Edie.

“When a child is sick, you dream about some miraculous treatment,” said Alex’s father, Jay Scott, 45. “They got it, and we couldn’t be happier.”