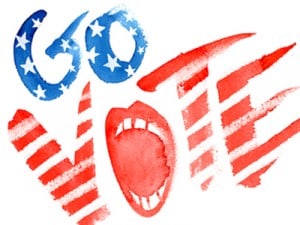 It’s a long ballot, and you have things to do, so let’s get this done. All these choices have been made with care and consideration, and you can just check the boxes and be glad you did.

There is no doubt that Brown will win. You could vote for Jerry Brown for Governor but he is going to win whether you vote for him or not, so here’s the moment to make a protest vote. If you like Cindy Sheehan, vote Peace and Freedom – If you like Luis Rodriguez, vote Green. But Jerry has this in the bag, so it’s an ideal ballot to move over a little to the left.

Second stop – Gavin Newsom, another cake walk. Jenna Goodman is Green, Amos Johnson is P&F. Although Gavin is about as feminist and green as you can get and still be a white guy, moving to the left lets the winners know who votes, and why.

Third Stop –  Derek Cressman (see letter to the editor below) who really has done some great stuff. Give this guy an office with some status, and he could do more.

Controller – Betty Yee. We need more women in offices like this, and Yee has the professional chops to do well with it. She’s been working for the state in some capacity ever since she worked for Gray Davis, one of our best governors. Unless you are a major financial maven, you probably don’t know enough about her to appreciate how good she is. She’s good.

Treasurer – Jon Chiang will most likely be the winner, and he’s done well with the controller’s office, but vote for Ellen Brown. Her ideas about banking and public funds could make this a much greener state in a lot of ways.

Attorney General – Kamala Harris. Let’s get Kamala a large. clear vote this time so she doesn’t have to wait weeks for all the ballot recounting. She has done an awesome job, and I’d like to see her in it for quite some time to come.

37th District – That is Karen Bass. While I sometimes dislike how she does things, when I look at her voting record, she does exactly what I want her to do, and that’s why we elect people.

30th District – Vote for Holly Mitchell. When you think of it later today, send her an email and thank her for her efforts in getting fracking banned in the state of California, and let her know that next time, we will succeed. If we had more politicians like Holly, we’d be living in a much better world.

54th Assembly – It feels like we just voted for Sebastian Ridley-Thomas, and I’m already so unhappy with this guy, I’m tempted to vote for Glen Ratcliff. The best protest vote here might be just to leave it blank.

Judicial – For most voters, this is pretty much like throwing darts with a blindfold on. Unless you work with any of these people, or know their friends and neighbors, it’s not information that is going to come to you. After researching multiple sources, these are my recommendations-

Judicial #72 Chris Frisco is running unopposed, so vote or don’t, it won’t matter.

Judicial #82 Ann Park has the field to herself.

Judicial #90 Serena Murillo can hang out with Chris and Ann

Ok, so don’t break the law, and you may never have to notice these people again.

Superintendent of Public Schools – Tom Torlakson. I know teachers up and down the state who think this guy is terrific, and that is the recommendation I stand with. If you think your boss is great, then he’s doing a good job.

Assessor – Jeffery Prang. WeHo Council member, former assistant and co-manager of the city of  Pico Rivera, he’s one of those who has put a lot of miles on in public service. I feel it’s just as important to increase the LGBT presence in state politics as it is to increase the number of women. If you always do what you’ve always done, then you ‘ll always get what you always got – change begins with changing perspective.

Sheriff – Jim McDonnell instituted some good reforms at the Long Beach PD when he stepped in as chief there. If her can do the same for the LA County Sheriff’s, that could be very good news. He served on the Citizen’s Commission on Jail Violence,  and he’s the only one running who isn’t already embedded deep in the system, and those folks tend to think that things are just fine the way they are. They are not. Vote to change that.

Down to the home stretch –

Measure 41  – YES. For heaven’s sake, vets should not be homeless. With the number of empty properties going to rot, every homeless person in the state could have a roof over their heads.

Measure 42 – YES please – Culver City is already way out front on this one, but public access to government records is vital to democracy. This one eliminates the state paying the city back for these efforts, but whoever has to pick up the check, it needs to be law.

Measure CC – YES. I know, there is a lot of hesitation out there, but any time you borrow money, you are committing an act of faith. You are choosing to believe that the future will be better than the past, and you are choosing to walk in that direction. So, have faith in our schools, our kids and our administrators. We can do this, and we will be glad we did.

Share this post shamelessly – A lot of people are going to avoid voting today just because they have not done their homework. These endorsements are worth voting for, and the turnout is going to be pitifully small. Now go VOTE!