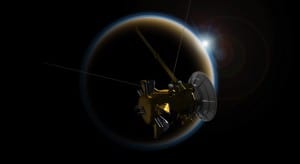 Scientists working with data from NASA’s Cassini mission have developed a new way to understand the atmospheres of exoplanets by using Saturn’s smog-enshrouded moon Titan as a stand-in. The new technique shows the dramatic influence that hazy skies could have on our ability to learn about these alien worlds orbiting distant stars.

The work was performed by a team of researchers led by Tyler Robinson, a NASA Postdoctoral Research Fellow at NASA’s Ames Research Center in Moffett Field, California.

“It turns out there’s a lot you can learn from looking at a sunset,” Robinson said.

Light from sunsets, stars and planets can be separated into its component colors to create spectra, as prisms do with sunlight, in order to obtain hidden information. Despite the staggering distances to other planetary systems, in recent years researchers have begun to develop techniques for collecting spectra of exoplanets. When one of these worlds transits, or passes in front of its host star as seen from Earth, some of the star’s light travels through the exoplanet’s atmosphere, where it is changed in subtle, but measurable, ways. This process imprints information about the planet that can be collected by telescopes. The resulting spectra are a record of that imprint.

Spectra enable scientists to tease out details about what exoplanets are like, such as aspects of the temperature, composition and structure of their atmospheres.

Robinson and his colleagues exploited a similarity between exoplanet transits and sunsets witnessed by the Cassini spacecraft at Titan. These observations, called solar occultations, effectively allowed the scientists to observe Titan as a transiting exoplanet without having to leave the solar system. In the process, Titan’s sunsets revealed just how dramatic the effects of hazes can be.

Multiple worlds in our own solar system, including Titan, are blanketed by clouds and high-altitude hazes. Scientists expect that many exoplanets would be similarly obscured. Clouds and hazes create a variety of complicated effects that researchers must work to disentangle from the signature of these alien atmospheres.

Spot—a swirling storm feature larger than Earth—is getting smaller. This downsizing, which is changing the shape of the spot from an oval into a circle, has been known about since the 1930s, but now a striking new Hubble Space Telescope image captures the spot at a smaller size than ever before.

Jupiter’s Great Red Spot is a churning anticyclonic storm. It shows up in images of the giant planet as a conspicuous deep red eye embedded in swirling layers of pale yellow, orange and white. Winds inside this Jovian storm rage at immense speeds, reaching several hundreds of miles per hour.

Historic observations as far back as the late 1800s gauged this turbulent spot to span about 25,000 miles at its widest point—wide enough to fit three Earths comfortably side by side. In 1979 and 1980 the NASA Voyager fly-bys measured the spot at a shrunken 14,000 miles across. Now, Hubble has measured the diameter of this feature to be just under 10,000 miles.