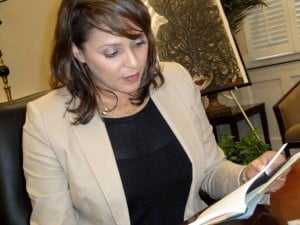 Culver City’s Anitoch University MFA Program will be featured on the PBS NewsHour this Tuesday, May 20, 6 pm on PBS SoCal (check your local listings for channel.)

U.S. Poet Laureate Natasha Tretheway, a recent MFA residency guest, hosts the program called “Where Poetry Lives.” The program will include an interview with Jenny Factor and four MFA students and alumni who did interesting field studies in poetry.

Tretheway’s  first collection of poetry, Domestic Work (Graywolf Press, 2000), was selected by Rita Dove as the winner of the inaugural Cave Canem Poetry Prize for the best first book by an African American poet and won both the 2001 Mississippi Institute of Arts and Letters Book Prize and the 2001 Lillian Smith Award for Poetry.

In her introduction to Domestic Work, Rita Dove said, “Trethewey eschews the Polaroid instant, choosing to render the unsuspecting yearnings and tremulous hopes that accompany our most private thoughts—reclaiming for us that interior life where the true self flourishes and to which we return, in solitary reverie, for strength.”

Trethewey’s honors include the Bunting Fellowship from the Radcliffe Institute for Advanced Study at Harvard and fellowships from the National Endowment for the Arts, the Guggenheim Foundation, and the Rockefeller Foundation. She is the Robert W. Woodruff Professor of English and Creative Writing at Emory University.

In 2012, Trethewey was named as both the State Poet Laureate of Mississippi and the 19th U.S. Poet Laureate by the Library of Congress. In 2013, she was appointed for a second term and, like those poets laureate who served a second term before her, she will undertake a signature project.AULA’s Master of Fine Arts in Creaitve Writing was named one of the top five low-residency MFA programs in the country by The Atlantic magazine.

The MFA in Creative Writing program is comprised of on-campus residencies – which include classes, readings, and workshops – complemented by a five month online project period during which students live and write in their home communities.

If you can’t catch it tomorrow on TV, you can watch the digital stream starting at 3 pm PDT:
www.ustream.tv/pbsnewshour