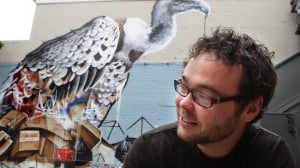 Internationally known muralist and street artist Fintan Magee, whose larger-than-life work has graced walls from Colombia to Denmark to Australia, will soon be putting his handiwork up on the side of a Culver City building at Lindblade and Sepulveda.

Magee will spend approximately five days painting the mural, after which he will move to Culver City High School, where he will commence painting another. He will also mentor students from the school’s Academy of Visual and Performing Arts (AVPA) as they paint their own mural and teach an artist’s workshop for the class.

Magee, who will arrive in Culver City from his native Australia on May 24, was raised in Brisbane, the son of artist parents. Exposed to art at a young age, Magee started out painting graffiti as a teenager before crossing over to muralism and street art in 2010.

Magee’s work is sometimes surreal, often character-based, and extremely illustrative – strange people wearing masks and play dangerous games, an infant dressed as Superman and speared by an arrow, an elephant intertwined with a house snagged by a tree as it flies.

His blending of cartoon-ish hero-style characters with everyday humans is a favorite, and his work has been described as, “not quite real and not quite imaginary. They teeter in a strange kind of limbo that’s neither here nor there.”

“We are tremendously excited that our students will have the opportunity to work with an artist of Fintan’s talent and stature in the art community,” said CCHS Principal Dylan Farris. “It’s one thing to see an artist’s work or even to meet him, but to work side-by-side with someone like Fintan will be an incredible experience for our student-artists.”

Magee said that one message he tries to convey regardless of his works’ subject matter is that public art is something every community should embrace. “Street art is important anywhere and to have strong visible culture is incredibly important,” Magee told The Daily Telegraph in Sydney. “I come from Brisbane which is completely devoid of public art, and it is not a nice environment for creative, freethinking people. Public art is very important because not everyone can go to a gallery every day. It is important to make art part of everyday life.”

Culver City resident Dan O’Brien, who is helping to coordinate Magee’s visit and involvement in both mural projects, said Magee won’t waste any time once he arrives. “I’m picking him up at the airport at 6:30 a.m.,” he said, “and we’re going straight to Home Depot to get his supplies!”