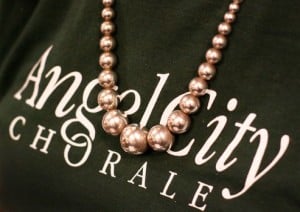 “Elements” is the theme of Angel City Chorale’s 2014 Spring Concerts, to be held at 7:00 p.m. on Saturday June 7 and Sunday June 8 at Wilshire United Methodist Church (4350 Wilshire Blvd., between Highland and Crenshaw). ACC is an independent, multi-cultural, multi-generational chorus that recently celebrated its 20th anniversary and currently musters about 150 voices.

This concert will be the West Coast Premiere of two-time Grammy winner Christopher Tin’s exciting song cycle The Drop that Contained the Sea, consisting of ten songs — each written in the language and style of a different culture: Turkish, Bulgarian, Ancient Greek, Old Norse, etc.

In June 2013, ACC presented the West Coast Premiere of Tin’s previous song cycle, Calling All Dawns. If you were there, you know that Tin’s work is spectacular and that ACC loves working with him. In February of this year, the group participated in recording a CD of The Drop, and, in April, was part of the international massed chorale that presented the work’s World Premiere at Carnegie Hall.

The text of each song in The Drop is about water in some form — from the basis of life to choppy seas to mud to snow. Other elements (predominantly earth and air) will be featured in the first half of ACC’s spring concert, where the group will bring our signature blend of pop, classical, and gospel styles. Whether your taste runs to Brahms or to Earth, Wind & Fire, you will find something to love at ACC’s spring concert.

Tickets may be purchased in advance at angelcitychorale.org. Adult general admission price is $30 in advance or $35 at the door door, with discounts available for seniors and children.. VIP and Preferred seating categories are also available.

Over 20 of ACC’s 150 members live in Culver City or Mar Vista, and many of their local friends and families come out to see them. Thus you have a good chance to spot friends and neighbors sharing your enjoyment of this historic musical event.