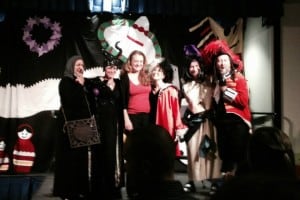 As the members of the Culver City Council PTA filled the stage at the Senior Center on Sunday April 27, the colorful costumes began to look familiar. The folk dresses of Mexico and Japan, the collection of mouse ears on hats – as soon as the music began, it was clear that the audience was in for a ride. “It’s a Small Town After All, It’s A Small Town After All…If you drink too much booze, you’ll end up in the news, It’s a Small, Small Town.” The re-written lyrics were just a sample of the sly fun that rolled through the show all evening.

The Honorary Service Awards have been an annual tradition reaching back decades, but only since school board member Laura Chardiet began writing, producing, directing and harmonizing have they become the spring event that draws in the entire district to have fun.

While every villain from Captain Hook (Howard Behnken) to Cruella DeVille (Laura Chardiet) found their way through the skits, (including a hilariously wicked turn by Jeannine Wisnosky Stehlin as Malificent, the evil fairy from Sleeping Beauty, threatening with the power of UPCC) the real scene stealer was the film reels of PTA Disney Princesses – the presidents of all the school based chapters turned out as specific Disney princesses, chatting cattily and checking each other out as they announced the names of the honorees for the each school.

It rolled seamlessly through PTA pirates and a talking parrot, the district officials of the Mad Hatter’s tea party, and a series of apologies from President Jody Reichel’s Minnie Mouse, making sure that the ribaldry was not intended to offend anyone. There was even time for the official business of swearing in the new board for next year .

With all the film and stage work, the singing and awards, the applause washed over the evening with all the colors of the wind.

As with the Rose Parade, there is most likely already a meeting scheduled to begin planning next year’s HSA awards, which will be even more fun. (Now, we just need to figure out a way to surprise Laura Chardiet with an award…)