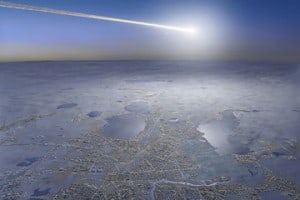 At a press conference April 22 at the Seattle Museum of Flight, three prominent astronauts supporting the B612 Foundation presented a visualization of new data showing the surprising frequency at which the Earth is hit by asteroids. The astronauts were guests of the Seattle Museum for a special series of public events on Earth Day 2014.

Dr. Ed Lu, former US shuttle and Soyuz astronaut and co-founder and CEO of the B612 Foundation, was joined by former NASA astronaut Tom Jones, president of the Association of Space Explorers and Apollo 8 astronaut Bill Anders, first chairman of the Nuclear Regulatory Commission and former chairman and CEO of General Dynamics, to discuss findings recently released from the Nuclear Test Ban Treaty Organization, which operates a network of sensors that monitors the Earth around the clock listening for the infrasound signatures of nuclear detonations.

Between 2000 and 2013, this network detected 26 explosions on Earth ranging in energy from 1 to 600 kilotons—all caused not by nuclear explosions, but rather by asteroid impacts. To put that in perspective, the atomic bomb that destroyed Hiroshima in 1945 exploded with an energy impact of 15 kilotons. While most of these asteroids exploded too high in the atmosphere to do serious damage on the ground, the evidence is important in estimating the frequency of potential “city-killer-size” asteroids.

The Earth is continuously colliding with fragments of asteroids, the largest in recent times exploding over Tunguska, Siberia, in 1908 with an energy impact of between 5 and 15 megatons. More recently, we witnessed the 600-kiloton impact in Chelyabinsk, Russia, in 2013, and asteroid impacts greater than 20 kilotons occurred in South Sulawesi, Indonesia, in 2009, in the Southern Ocean in 2004, and in the Mediterranean Sea in 2002. Important to note as well is the fact that none of these asteroids were detected or tracked in advance by any existing space-based or terrestrial observatory.

“While most large asteroids with the potential to destroy an entire country or continent have been detected, less than 10,000 of the more than a million dangerous asteroids with the potential to destroy a major metropolitan area have been found by all existing space or terrestrially-operated observatories,” stated Lu. “Because we don’t know where or when the next major impact will occur, the only thing preventing a catastrophe from a ‘city-killer’ sized asteroid has been blind luck.”

The B612 Foundation aims to change that by building the Sentinel Space Telescope Mission, an early warning infrared space telescope for tracking asteroids that would provide many years to deflect an asteroid when it is still millions of miles away. The B612 Sentinel Mission will be the world’s first privately funded deep space mission that will create the first comprehensive dynamic map of our inner solar system, identifying the current and future locations and trajectories of Earth crossing asteroids. Sentinel will detect and track more than 200,000 asteroids in just the first year of operation, after a planned launch in 2018.

The B612 Foundation (/www.b612foundation.org) is named for the asteroid home of the “Little Prince” in Antoine de Saint-Exupery’s classic novel, Le Petit Prince. The Little Prince came to realize that what is essential in life is often invisible to the human eye.
For a video visualization of the findings, showing the impact size range and location of all 26 explosions, see:b612foundation.org/portfolio/impact-video