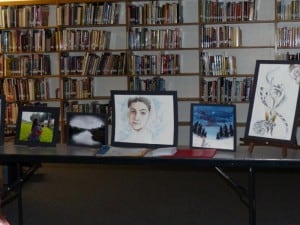 The Culver City High School PTSA paid an elegant tribute to student artists, parent volunteers and one outstanding teacher at their March meeting.

The student artists had participated in PTA’s annual, national Reflections program, which highlights the importance of Arts Education and celebrates the achievements of young artists at every grade level.

CCHS PTSA received over 50 Reflections submissions on this year’s theme: “Believe, Dream, Inspire”. A few were displayed at the March meeting and presented in a montage that had original student musical compositions as its soundtrack. Students who placed first at the high school level went on to the Thirty-Third District of the California State PTA. Those who placed first at the Thirty-Third District went on to the statewide competition. Culver City High School Students who went on to the District and State Competition were:

Students in the high school’s culinary arts program added a scrumptious buffet of hors d’oeuvres to the festivities- crostini with a choice of three toppings, Creole barbecue shrimp, chicken salad and more. Clearly Culver City High School has great artists in a variety of fields