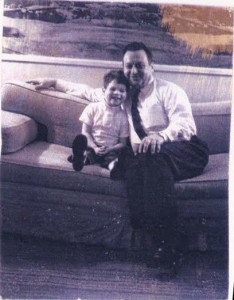 “I knew I had to face the truth, but I was afraid it would be even worse than the rumors.”

Culver City author Darrell Fusaro has been trying to find peace amidst the mystery surrounding the murder of his grandfather James Fusaro for decades. James Fusaro, a union official was found dead in his Passaic, NJ, office on New Year’s Day 1970 after apparently having been beaten and stabbed. Who did this, and why, has never been determined.

In the immediate aftermath of his murder and as the sensational news about it rose to fever pitch, the very close Fusaro family rapidly fell apart. Darrell attended the local elementary school with shame, aware of the speculative rumors whispered among the parents of his friends that his grandfather’s murder was a mafia hit and they cut off his penis.

After agreeing to do the radio piece with KCRW’s UnFictional producer Bob Carlson, Darrell contacted the Passaic, NJ Police Department. Fusaro had been to the location where his grandfather was murdered and informed the police that there was blood still on the walls. The police officer he spoke with thought it was a joke, but since the old union office was just blocks away, the officer decided to take a look for himself. Once the building owner let him in, he couldn’t believe his eyes. Soon the criminal forensic team was combing through the place for new evidence 44 years after the homicide occurred.

In this episode titled, A Murder in Jersey, KCRW’s UnFictional follows author Darrell Fusaro as he returns to the scene of the crime and discovers the disturbing evidence that pieces together what may have actually lead to his grandfather’s murder.

UnFictional, part of the KCRW Independent Producer Project, features captivating stories of real life told by writers and performers. It is a showplace for documentaries created by the most talented producers and storytellers from Los Angeles and around the country. For more information on UnFictional please visit www.kcrw.com/unfictional