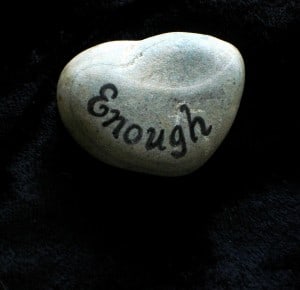 In Japan, they say you are an adult at 20 years old, and there is a ceremony called the “seijinshiki” (成人式). I turned twenty in Japan, during my Junior Year Abroad, so I was fortunate to experience the traditional visit to the town hall, and the celebratory meal afterward.. Girls my age dressed up in kimono, but gaijin that I was (still am, and always will be), I think I wore business clothes of some kind. I thought the ceremony had taken place on January 15th, and it had, then. I went on the web to verify that date, I learned that during the 90’s the date was changed to the second Monday in January, due to the enactment of the so-called “Happy Monday” law.

I can divide my adult life thus far into three distinct parts of “ENOUGH,” from the age of 20, to my current 55. 20-35 represented the “GOOD ENOUGH” years. 35-50 can be characterized as the “NEVER ENOUGH” years. Now, however, I am five years into what I call the “ENOUGH is ENOUGH” era.

During that first chunk of years, also known as “my youth,” I limited myself. I lived by the “good enough” doctrine. I had developed a case of low self-esteem, and acted from the standpoint of feeling that I did not deserve any better than what happened to come across my path. I only applied to one college (UCLA), sailed through the experience there, and finished in a mere four years. I was turned out into the world at 21, all dressed up with no place to go. I had no idea what to do with myself after graduation. At the very apogee of endless possibilities, I considered only two options at the time: marrying a man I barely knew, or house-sitting for my parents in Los Angeles, while the family went off to Europe. Neither choice involved a job or further education, I notice now. I chose Option A.

As I just told my 19 year old son, a 21 year old UCLA graduate like myself actually had innumerable choices. It only recently occurred to me, for example, that I might have gone to grad school then, instead of waiting twenty plus years. In the area of romance as well, I settled for whomever I could lure into a relationship: anybody who seemed the slightest bit interested in me. That was the only requirement on my checklist. I never spent time alone, through back-to-back, sometimes even overlapping, courtships, and ultimately the two marriage covenants I entered between the ages of 20 and 35.

Not that I regret either marriage, but, unlike how I see other people deal with the question of whether or not to get married, I felt rushed into the decisions, by two very similar external factors. First, I needed a visa to stay in Japan for any significant length of time, so when a nice Japanese man asked me to marry him, I agreed to it. Second time around, my company was sending me back to Japan. The only way I could bring my then “boyfriend” along was to marry him. He became the father of my children. In both cases, no questions asked, no soul searching. My feeling both times was: good enough.

The years from 35-50 found me, literally, in a house on a hill with a white picket fence, two (actually three) cars, and two healthy children. Isn’t that enough? It might have been, but not when you don’t get along with your spouse. Everything seemed to be in abundance. Financial times were pretty good, so I never had enough clothing or trinkets. And there was never sufficient time with my boys. First, there was my heavy work schedule, with long days and frequent business trips. As the marriage broke apart, and I went back to school for my teaching credentials and masters degree, time was even more limited, as I tried to squeeze bits of work in, transitioning from freelance travel work to freelance teaching work. Then, just as I settled into a regular teaching job, the time I could have had was inevitably divided up by a custody schedule. When I look back at those middle-aged years from about 1993 to 2008, I was always chasing time, acquisitions and experiences.

It was during this time period that I also changed careers, from the travel industry to the education industry. A friend who had gone from education to travel and back noted the difference in the pace of the work; she was right, at first. In the international travel industry, you worked long days and nights. There was no end to the cycle of sales and marketing, of trade shows and customer visits, operational snafus and meetings. You walked briskly.

The school day, however, is a short one. Your transitions are dictated by a bell schedule, and a ten-month calendar. Every June is a closure, every September a fresh start. It seems that there is always exactly the right amount of time for everything. I quickly took on all sorts of extra responsibilities, and now my day-to-day pace at the “school business” echoes the brisk walk of the travel business. But the school imposes breaks over winter, spring and summer insist that you take time to clear your mind. Eventually, I got used to the pace of school, and now I love the punctuation marks of the school year as time for self-reflection.

Four years into my 50+ years, this past year has me embarked on what I call the “ENOUGH is ENOUGH” years. I am hoping this particular era will last longer than just a fifteen year interlude, and will in fact carry me through the homestretch.

How much enough is enough, though? I have (still) not reached the enough stage on: traveling, collecting books, or shopping for things I love. What I have called “uncle” on is: excessive eating and drinking, any hint of a sedentary lifestyle, and the relationship chase. In these past five years I have: divested myself from what I felt were toxic friendships and/or “relationships,” I’ve taken control of my eating and drinking, and, I try not to let more than a day or two go by without strenuous physical activity.

I keep ranting about how I’ve lost 25 pounds, which is a continuous struggle, especially on a vacation, when I can’t be active enough. I believe that I’ve mastered knowing when I am full, and, most of the time, I can stop myself before that point. If you can feel “full,” you can eat whatever and however you want. If you understand when you are hungry, and only eat when you are hungry, and not eat when you’re not, you can eat what you want. I am not into deprivation of any kind; I am just into awareness. I’d had enough of being old AND fat. So, the food is part one of three.

Part two of three is the physical part. I don’t like to use the word “exercise;” I’d never do THAT. I do dance at least twice a week, however. And I’m not saying that I take lessons, I’m saying: I dance. I do three to four hours straight of Israeli style (folk) dancing on Wednesdays, and two and a half to three hours of “Contra” (aka American folk) dancing on Saturdays. I’ve written much about both types of dancing in previous articles. Over the last year, I’ve added one to two more nights a week of either or both types of dancing, and in the last half year, I’ve added a new type of (folk) dancing, or, shall I say, “people’s” dancing: a Cuban style salsa. I do the so-called Rueda de Casino dancing two-hours a week, every two weeks, and, if time permits, I plan to expand it to weekly.

But woman cannot live, or get thinner, on dance alone. I do take long walks sometimes with colleagues at work, but the big game changer is bicycle riding. I took it out, dusted it off, and began to use it to commute to work from the beginning of the school year this past September. I can take a bike path part of the way, which is virtually unfettered by cars, and there are three inclines going and coming that cause me to work my muscles, if not attain the suggested 20 minute aerobic workout. Here is one enough I hope to never get enough of: physical – I refuse to call it exercise – activity. I am convinced now that there is no way to lose weight, actually no way to be really healthy, without being willing to shake your booty. However, sitting in a Weight Watchers meeting, for example, you don’t always want to hear this. But I’ll say it here: it IS actually good enough to just start by reducing food intake, but eventually, your physical activity must increase.

The last area is the relationship shtick, and I’ve seriously had more than enough, for a lifetime. At 55 years of age, I am sorry to report that there are deadly few heterosexual partnership options for a woman my age or over. Thinking that the odds are what they were during the 20-35 or 35-50 years would doom a person to a life of frustration. The way I see it, I lost my chance for what I call a Chick Hearn marriage (when he died, they spoke of his marriage of 60+ years). When I witness people in marriages of thirty years or more, and realize that I’ve forged a different path. I have found that I get some of the best relationship advice from 20-something’s who have not suffered (at least yet) from the lack of confidence that I did at their same age. When I talk to them, they often open my eyes to options I’d never allowed myself. For example, I recently learned a lesson, which I now keep as as my number one “enough is enough” relationship mantra: “Guys like to be in control, and so do you. So you can keep control, by letting the guy control the relationship.” The Padawan telling Yoda like it is.

And if my twenty-something friend’s advice works…I’ll let you know.