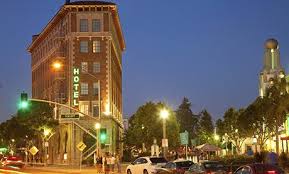 The third Wednesday of the month is always a party in the downtown district, but the Culver Hotel went one better by hosting the evening for Jim Clarke’s ‘Following Through’ campaign. The upstairs salon known as the Parisian Room was the scene of dozens of Clarke’s friends and fans, wishing him well on his re-election bid.

City Council member Andy Weissman and School Board President Laura Chardiet  played their parts in an amusing awards ceremony, where Clarke was given the prize for “Best Actor in a Political Role” for his portrayal of Harry Culver at last summer’s Culver City Historical Society event. Spoofing the Oscar telecast, Clarke accepted with Matthew McConaughey’s exclamation of “Alright, alright, alright!” and thanked everyone on his team, everyone in the room, and well, pretty much everyone.

While the Oscar parody was funny, it also underlined a fact about local politics; you do need to have a list of supporters at least as long as anyone’s Academy Award speech, and thank yous that go on for three minutes, or five minutes… there is still someone that you may have left off. Clarke has that many supporters, and clearly the council he currently works with will be happy to have him keep his seat.

When asked about how the campaign was going, Clarke offered that he still had precincts yet to walk, but he’d covered a great deal of ground, and he had lawn signs left to distribute. “I’m quite pleased with the response I’ve had so far,” he said, “and since the campaign has only a few more weeks to go, I’m feeling like it’s all going in the right direction.”

As more supporters arrived and Clarke was carried away, shaking hands and exclaiming greetings, it would be easy to consider him as a pretty big star.