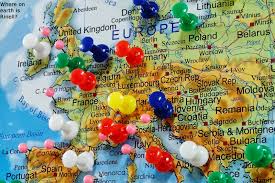 The Treasures of Travel —

Spring break is coming for those of us involved with schools in any way, from being employed with the schools, to having students in the school system, K to College. Personally, I’ve taken elaborate spring break trips every year for the past ten years, since I wound up doubly connected to schools when I landed a job in the same school district that my children attended. I took trips with them until last year, when two friends and I decided to do a bit of South America. This is the first year in so very long that I did not end up making any travel plans. I don’t feel satisfied just staying home either. The whole thing has made me wonder why I love traveling so much; why do I have this overwhelming need to travel?

I love to travel because my trips heighten my five senses of sight, sound, taste, smell and feel. When I begin to reflect on the best sensory experiences I have had throughout my travels, and classify them into eyeball events, musical moments, culinary capers, olfactory opportunities and weather wonders, I realize exactly why my journeys are worth the time and money spent.

The three most beloved sights I’ve seen are in Brazil, Japan and Israel, in no specific order. Corcovado, the arm-stretched, welcoming, statue of Christ atop the highest of many promontories in Rio was so breathtaking, I could not take my eyes off of it the whole time I was there. I posted on Facebook that it was as close as I’d ever come to converting. Next, on one of my trips to Japan, I was leading a small tour group of ten people. We made our way to Himeji castle, one of the best-preserved castle museums in Japan. I always liked walking toward it from the distant, initial vantage point of the Shinkansen station. This time, however, the particular day was “mankai” or, “full bloom” of the Sakura (cherry blossoms). Even having lived in Japan for ten years altogether, and having caught glimpses of Mt. Fuji from various vantage points, nothing could compare with this one perfect day at Himeji castle. The fact that it rained so hard the next day in Kyoto that my shoes got soaked, and I had to buy a new pair on the spot, accentuates the fleeting beauty of the day. Finally, driving into the Jaffa gate of Jerusalem’s old city by car, and parking it in the little hotel garage, just tucked inside the wall of the city was, twice (I went back and did it again later the same year, and will do it later thus year again) a singularly sinful pleasure.

Three places that I’ve literally heard music in the streets have been: New Orleans, Venice and Tel Aviv. Jazz fans can walk down Bourbon Street, a few blocks reminiscent of Disneyland’s Pirate’s of the Caribbean environs, only it is real. Store fronts are open to the street, and live bands play music all over the city. In Venice’s St. Marks Square, competing bands play Italian Cansone. The Venetian hotel creates a facsimile of the experience, and I go there whenever I end up in Vegas, just to pretend. My final musical experience is not just about music, but the dance that goes with it. One of the reasons I even thought of traveling to Israel at all in 2012, was because of a short clip a friend posted on Facebook of people dancing on Gordon Beach in Tel Aviv. When I arrived there, and literally ran toward the music, then danced on the beach right as I had seen in the video, I claimed I’d found heaven on earth.

Three of the best things I’ve eaten during my travels were in Rome, Buenos Aires and Tokyo. We ended up on Easter Sunday in Rome. You can traverse in and out of the ruins easily enough, but, hungry after such an expedition, where are travelers supposed to eat out on such a religious day? Most restaurants we passed were closed. Just when we thought we’d have to trek to some kind of international hotel for a bite, we happened upon the centuries old Jewish quarter, tucked right between the ruins themselves (as old as the ruins) and the Tiber river. There, we found quite a few Jewish restaurants open, and had the famous and typical Roman-Jewish delicacy: fried artichokes. I’ve never had anything as delicious before or since. You can actually Google up what it looks like, but, you have to go there to taste it. More recently, in 2013, I traveled to Buenos Aires for the first time. Again, after a long day of walking the city, restaurants were not set to open until later in the day. The best places in the area expected advanced reservations. We were lucky enough to get a non-reserved table outside on the sidewalk. Low on atmosphere, but, our first meal consisted of one of those Argentinian steaks doused with garlic. As I am often wont to say: to die for! Finally, there is my Tonkatsu (pork cutlet) in Tokyo. These days, you can even get the dish here in L.A., after many years of bad or non-existent versions of the calorie killer. I have my favorite places in my second home of Tokyo. On a 24-hour layover on the way back from Vietnam a couple of years ago, I not only savored the meal at my favorite place, but went out of the way to book a hotel right across the street from it!

Japan gets three honorable mentions in this article: there is a particular smell, upon check in to a Japanese hotel that I crave. It is the odor of cleanliness, perhaps the scent of soaps used in the bathrooms, I don’t know. But even when I am fortunate enough to be offered a stay at a Japanese home when I travel there, I still like to stay at least one night at a hotel, just to snarf up that comforting smell. I think Pacific Rim destinations really take the cake for the nostrils. The perfume of tropical flowers in Hawaiian resorts is memorable. There’s also that beach resort mix of incense and flowers and delicious spices they use in the cuisines of South East Asia, specifically Thailand and Indonesia, that I recall among my favorite and most intoxicating sniffs my nose can tolerate.

I have traveled back many times to three locales that I love for the feeling of the weather, especially at specific times of year: Lake Arrowhead, Catalina and Seattle. I actually love the rain in Seattle; the antithesis of too dry Southern California, Seattle’s rain makes everything green. My relative who has lived there the better part of 80 years claims that he never uses an umbrella. The rain comes and goes, and you learn to drive, function and live in it. True, I only lived there for six weeks once upon a time, but it sure is a nice place to visit, in the rain. My sons and I have gone to Catalina almost every summer for the past fifteen or so years. We go for the perfect, not-too-warm, not-too-cold weather that August affords the small island, where you can spend all day and night outdoors. Finally, Lake Arrowhead, less than two hours from the Westside, provides a real winter-like buzz, from Autumn to Spring. We’ve spent crisp Thanksgivings there for the past ten or so, and have even been snowed in three times!

So this is why I travel. I dread the idea of just staying put when I have two weeks off. I am struggling, still, against the concept saving a little money for a change, and against the enjoyment of all that Los Angeles itself has to offer from late March to early April. This is why I am “making a career” (after a real 20 year career in the travel business) out of the effort required to search for deals and destinations at this late date. The memories that are made when you travel, and how the experiences shape your world view, are the longest lasting souvenirs we have in our journey of life.