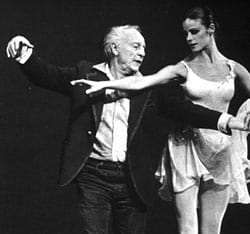 George Ballanchine, said to be “the 20th Century’s most prolific and famous choreographer,” and considered the “father of American Ballet.”

He said to his students, “Why are you stingy with yourselves? Why are you holding back? What are you saving yourself for – for another time? There are no other times. There is only now. Right now.”

I woke up to this quote today, which came rolling up on my Facebook, posted by a new dance friend. No wonder that dance quotes posted by other dancers might appeal to me; this spoke so directly to me that my writing muse slid into cruise control immediately!

The quote and its sentiment reminded me of when my mom used to say to us, “What are you waiting for, Christmas?” It was her way of telling us to jump-start, get a move on, and it was always extra funny when she said it in December. It was doubly ironic, because our family never used Christmas as an excuse to wait for presents or special occasions, even though it was my parents’ anniversary. It was just another day off to us, and we were usually schlepped off to Las Vegas, where things were open, and which was my parents’ favorite place for R&R.

Ballanchine speaks loud and clear to me. Too much restraint in academic, professional, leisure and romantic pursuits is about fear, and can lead to frustration, and failure to achieve success. The opposite of stinginess is excessiveness, of restraint: addiction. Addictive behaviors lead people to lose control, which is not good all the time, but IS good some of the time. As Oscar Wilde said, “Moderation is a fatal thing; nothing succeeds like excess.”

Students regularly “hold back” in the form of what I’ve heard called “Perfectionism Paralysis.” Some of the hesitancy I encounter with middle school students is absolutely developmental; their minds and bodies are changing, and they are often unsure of themselves, as I likely was at that age, too. However, some students don’t speak or write much, because they are blocked by emotions. I see this not only in my middle school students, but in the many adults I have taught Japanese language to over the years. There too much noise, too many questions, going on in people’s heads, including worry about embarrassment, which just relates back to the perfectionism. Students perseverate about things like penmanship, spelling, pronunciation and grammar so much so, that that they won’t even try to put a sentence onto a paper.

When my parents and sister went off to Italy in 1981, my father and sister took six months of Italian before the overseas assignment. My mother could not be bothered to take the class. When I went to visit them, we went to a train station trying to buy some tickets. My sister and dad stood in the corner of the lobby consulting their phrase book, while my mom came back holding the four tickets she’d bought in her hand. With virtually no Italian, she’d marched up to the window, raised four fingers, and likely mispronounced our destination, but they’d understood. She communicated. The job was done, and without the hesitation of getting a sentence right.

I think the unwillingness to at least try to jump in and act becomes habitual. When people “don’t want” to do something, and then find that they “don’t have” to do it, an inertia is created that becomes self-fulfilling. Some parents will use the term “lazy” when speaking of their own children, but, in parent –teacher meetings, I always object to that term. I think that “laziness” has somehow become a socially acceptable label that actually masks something deeper, a lethargy that borders on depression.

I see “holding back” or, too much restraint, in the workplace, too. I have often envied colleagues who seem to have, perhaps, more of a “life” outside the job. They act calm all the time at work, seem positive, and nobody can ever complain about their job performance. I, on the other hand, tend to get too passionate about every little thing. I’ve laughed raucously, I have even cried, and I have lost sleep about things that worry me. On various issues that have come up in both of my careers, I often find myself in the minority opinion. This is not to say that I’m not loyal to my job; conversely, I care too much! At the risk of being thought of as a pain in the butt, I have sometimes lobbied for what I have thought was “right”. This is a scary position for a “salaryman” (direct translation from Japanese) like me, but I believe that I became this way from my years working in Japan. One of my former bosses from Japan once came to visit me here. He said, “I wouldn’t want to work in America,” and when I questioned him why, he said, “Because Americans are ‘dry,’” whereas Japanese are ‘wet.’” Hmmm, “wet” and “dry” as adjectives for human personalities? Yes! Ballanchine, in his quote, was looking for his dancers to be “wet,” not “dry.” Dry people seem always to be saving themselves, but, for what?

In relationships, you witness “hold back” constantly. Anybody who has ever attempted online dating at all, even those who have been successful at it, will tell you about the number of “lurkers” who exist. These people are happy enough to exchange written messages, or speak by phone, but, who has not been no-showed on, when it came to actually coming out and meeting a person? I’ve never understood what that phenomenon was about, like, either not being willing to set up a time at all, or, actually going ahead and making plans, but then breaking them? What is up with that? Then, there are the tons of people who do get dressed up and primed to come out, only to go on and on about how “injured” they are from past relationships, or, for whatever reason, “are not in a place to date right now.” All of this is a “cop out;” a 70’s slang term meaning: failure to face a difficulty squarely. Or, maybe they are trying to be polite, but “just not that into you,” which is possible, but maybe a little dry, also.

People wait until some perfect magical age to get married, or have kids, and then, when they get to that artificial moment, they cannot or might not be able to go forward with such plans. From my past-fifty vantage point, the same perch from which I write everything, you start meeting plenty of others from your same age range who never managed to take the risk of at least seeing what it would be like to be married…victims, again, of saving themselves for the day that never comes.

Ballanchine’s quote was meant for dancers in the first place, and the world of dancing is where you can so viscerally encounter those who do not fully invest in the activity. They have what we call “spaghetti arms,” they don’t plant their weight squarely on the dance floor, nor are they able to give you that so-desired push-pull feeling. Above all, they can’t seem to look you in the eyes when you dance with them. All forms of dancing require both leads and follows to be resolute in this posture.

I don’t know what it is like for other kinds of people, but I can tell you that I feel every surface of my body, inside and out, when I dance. If I am raising my arms up, my elbows are locked and my fingertips are extended. When the move calls for a kick, my leg and foot are raised as high as possible into the air. I have written much about the connection you establish with another partner when you Contra dance, where eye-to-eye contact is de rigueur. It may only be for a few moments, but you literally are looking into the other person’s soul. You commit, at that moment, 100%, which people sometimes call flirting, but I think is much deeper than a flirt. At that moment, you have no fear. You are not afraid of the other person, nor, more significantly, are you afraid of yourself.

The leader of one of my dance organizations called it, “an intensely focused piece of humanity like no other.” He claimed that so many of our dancers have the “skill, grace, passion and a desire to make a connection in time, space, music and motion.” And this, I believe, is the essence of Ballanchine’s message to us: don’t be afraid to make a connection, not only if and when we dance, but in all of life’s challenges and pursuits.