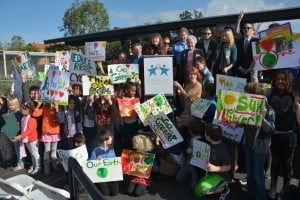 At the back of the Farragut Elementary School campus, a crowd had gathered that was about two-thirds students to one-third adults, the younger Farragut Foxes lining the sides of the area to make space for the plastic chairs of the visiting audience, both facing a dais and a podium, positioned just in front of the array of solar panels. February 4, 2014 was to be the culmination of years of effort, and the ignition of solar power for the CCUSD campus complex at Elenda and Farragut.

Superintendent Dave LaRose welcomed the crowd, offering,”For those who have lived through change…it’s not comfortable in process, but once you’ve been through it, it’s worth it.” He thanked the Sustainability Committee, the firms of Sunpower and Reno construction, and the many members of  successive School Boards who had all supported the project.

When School Board President Laura Chardiet took the podium, she commented on the history of the project, noting that “Seventeen years ago, we passed Measure T, which gave us the money to invest in our schools, so we could be here to celebrate today.”

As Todd Johnson, the co-chair of the Sustainability Committee came to the podium, he started the calendar on the solar project at April of 2008, when the idea of solar panels for the schools was introduced to the realm of possibility. “Now that we have this project up and running, we will be moving $8.5 million into the general fund, and instead of [the recent recession and the possibility of hard times] letting go of needed staff, we can give a pink slip to the energy bill.”

Johnson continued, “The energy we will save with this solar array is the equivalent of planting 5000 trees per year for the next 30 years.” He went on to thank KyotoUSA, a non-profit group that had helped at many stages of the process.

Nick Guthman, the President of the Associated Student Body of  Culver City High School, included the Alliance for Climate Education in his comments, noting that recent assemblies at the schools had impressed him with the urgency of the problem. “It’s [our] generation that is inheriting a planet in crisis… We can change this, but we need to work together.”

Shea Cunningham, the co-chair of the Sustainability Committee, got the younger part of the audience completely engaged with posters and a pop-quiz promoting the Green 5 campaign, and offered a look forward to the upcoming food composting that would be the next step in making the schools more sustainable.

When Vice Mayor Meghan Sahli-Wells came forward, she spoke even more directly to the grade schools students in the crowd, telling them ” When you are older, you are going to be able to look back and say, wow, we used to use energy that actually hurt us; we were using fuel from the dinosaur age!”

In his closing comments, LaRose recounted again all the people who had ushered in this new era, from the Sustainablity Committee to the school board to the construction companies, and exhorted the children to “Believe in what you stand for, and stand for what you believe in.”

The crowd rushed together, waving posters and cheering at the switch was opened. With a chorus of “Here Comes the Sun” pouring in from the PA system, it was a morning of brilliant accomplishment.