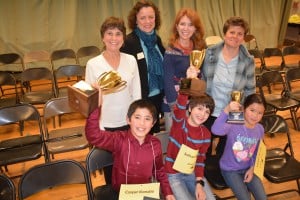 Cooper Komatsu stood tall and confidently spelled the word A-P-P-R-E-H-E-N-S-I-O-N to take home the Ninth Annual Culver City Unified School District Spelling Bee title on February 3 at Linwood E. Howe Elementary School. The six-grader from Culver City Middle School finished atop 23 other spellers – four students from each of the district’s five elementary schools and Culver City Middle School competed.
Komatsu certainly has a thing for spelling.
Two years ago, Komatsu and his partner, Lily Haines from Indiana, finished seventh in the nation in the 2012 National School Scrabble Championship in Orlando, Florida. The tournament featured the best young Scrabble players in grades 4-8 from throughout the United States and Canada. He was the first fourth-grader ever to finish in the tournament’s Top 10.
Last year, after winning the CCUSD Spelling Bee, he advanced to the Los Angeles County Spelling Bee, where he finished second, and ultimately to the California State Spelling Bee, where he finished as California’s 24th best speller.
“I’ve been spending about half an hour each day preparing for the spelling bee since May,” said Komatsu, who said he hopes to advance to the state level again this year.
At the 2014 Spelling Bee, Komatsu took home a first-place trophy and a $200 cash prize courtesy of The Fineshriber Family Foundation, which sponsored the event. He will advance to the Los Angeles County Spelling Bee, which will be held at 4 p.m. on March 26 at Almansor Court, 700 S. Almansor St., in Alhambra. The winner of that competition will advance to the statewide spelling bee in Sonoma in May.
Marcia Antopol, executive director of The Fineshriber Family Foundation, also presented a trophy and $150 in cash to second-place finisher Joshua Nisenson of Culver City Middle School; and a trophy and $100 in cash to third-place finisher Yvette Soong of La Ballona Elementary School.
In addition, each participant received a certificate of commendation signed by the District’s superintendent congratulating him or her on reaching the Spelling Bee finals.
The CCUSD Spelling Bee will be broadcast on local television on Channel 35.
Congratulations to all of the Spelling Bee finalists:

2013 02 Maleman 344.JPG – Cooper Komatsu throws his hands up in victory after spelling the word “apprehension” and winning the 2014 CCUSD Spelling Bee.

DSC_7687.JPG – CCMS student Joshua Nisenson reacts after spelling a word correctly on his way to finishing second in the 2014 CCUSD Spelling Bee.