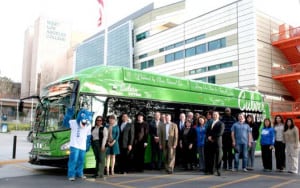 On Tuesday, January 29, Culver City, Los Angeles Community College District and Culver City Unified School District officials gathered together with West Los Angeles College leadership and students to celebrate the opening of the new on-campus bus stop which brings riders right to Admissions and Student Services, the Bookstore and Café, classrooms, and an elevator to the upper level of campus.

The location of the new bus stop was made possible by the college working in partnership with Culver City to create a bus turnaround at the college. The turnaround was funded by voter-approved construction bonds. In addition to bringing riders up two long inclines which can be a difficult walk for some, it minimizes the number of homes adjacent to the college that the bus must pass.

The Culver City Bus had the honor of “cutting” the ribbon to the turnaround by driving through it as the WLAC president and mascot waved to all.