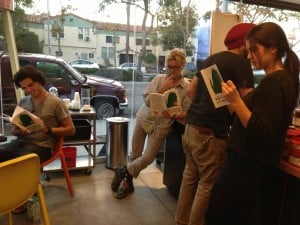 Imagine that it’s darkest before the dawn, that it’s all about listening to your inner voice, and that everything works out for the best; you’ve just imagined “What If Godzilla Just Wanted a Hug?” by Darrell Fusaro. The renowned local cartoonist has come out with a volume that’s a self-help memoir filled with the illustrations that have made his name.

How did all this happen? “I’m always looking for good places to meditate,” he observed,  “and I discovered this cool little bookstore that’s run by an an order of nuns. Now, not only is it a great store, but there’s this really sweet little chapel attached to it; very uncluttered, very peaceful. So I got to using this as my meditation spot.”   The nuns enjoyed having Darrell around, and because the order that runs the place is dedicated to communication, the notion of a book came about.

Filled with short but poignant tales, Fusaro recalls life on the Bering Sea, blowing up a model of Las Vegas for Con Air, and meeting his wife Lori at a party he was sure he did not want to go to until he got there.

“I totally lucked out, moving to Culver City, who knew this place was gonna be so hip?” Fusaro also felt the universe was smiling on him to put him right where his heroes, The Little Rascals, had been filmed. “I watched that every day when I was growing up, I thought they were real kids from yesteryear. I didn’t occur to me that it was a made-up movie.” In one story in the book, he compares his go-kart adventure to the one filmed by Spanky and the gang, and thinks his may have been even more improbable.

Fusaro will be signing at Pauline Books & Media , 3908 Sepulveda Blvd. on Dec. 21 from 2 to 4 pm. Come on over and buy a book, and it will prove yet again, that everything works out – sometimes even better than you think.