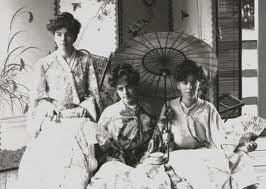 Many female writers make it their business to dish about men, and the failed relationships they experience with them. Of course you’d only read about the disappointments, because the last thing anyone would want to hear about is the tedium of a long term, harmonious life with another person. This was the beauty of the popular series “Sex in the City,” which was about the ups and downs of dating in 90’s New York City.

The show never “jumped the shark” while it was on HBO, but the films that lived on after the series had ended sure did; even in fiction, it proved impossible to continue with an interesting story line once all of the characters had been matched up into neat little Noah’s Ark pairs.

When I first toyed with the idea of starting to write, I figured I’d editorialize about the lunacy, hilarity even – on a good day – of online dating. Everyone who has done it has their war stories, including the “success” stories of those who, thanks to good timing and luck, met life partners. My sons, however, made me promise NOT to write about the dating scene. And, since I did put two sons onto this planet, it would not be fitting for me to start “dissing” men, and their alien ways.

Still, as I inevitably ponder the issues of male-female relations, I am reminded of the words of a friend from Japan who once told me that the Kanji (Chinese-Japanese character) for “person” (人) shows two bent lines “relying” on each other to “stand up” again – I’ve written about this before, perhaps under a in a different context. He implied that any woman (or man, for that matter) who was too independent, could not be successful in a relationship, which actually requires such attributes as diplomacy, negotiation, compromise and interdependence.

I’d actually prefer to reflect on the number of women over 50 who I socialize with, a.k.a. my single women friends, rather than trying to analyze men from a woman’s perspective.

First, many of us are veterans of thirty years of relationship wars. Some never made the leap of commitment to marriage, yet some have been married even twice. In all cases, we relationship survivors found that we had to work hard, too hard, sometimes, at the attributes I mentioned earlier, from diplomacy to interdependence. I believe that people who are able to maintain long term relationships are better at the sacrifice required for the day to day negotiations of compromise.

Second, we are financially independent. Some have more disposable income than others, some live by borrowing from the future, some live frugally no matter what their financial situation. However, what we have in common is that we’re willing to spend significant sums on pursuits that make us happy. We’ll travel, eat out, spend our dollars on The Arts, from films to museum admissions. We go shopping. Some of us will even spring for occasional valet parking.

Third, we are “with it.” We text, we Facebook, we dance, exercise, zumba, yoga. We prepare food, we taste wine, beer, cheese and chocolate. We do more than three activities a day. We are highly educated, we read, we travel. Did I say we travel? With one or more of my chick friends, I have travelled many times on day trips to Santa Barbara and its glorious wine region. I’ve driven to San Francisco, I’ll travel anywhere, near or far, if i can dance at the other end.

It all began when my Australian friend invited me to visit her in Melbourne in 2008, after we had reconnected via the then-newish medium of Facebook. Since that year, we’ve been, literally, around the world. And we’re not done yet. Now, other fabulous female friends have joined our jaunts to: New Orleans, Jerusalem, Tel Aviv, Buenos Aires, and Rio de Janiero. We’re all currently figuring out the next place to plant flags on our Trip Advisor “list of places we’ve been.”

I declare that we are, to a person, attractive, well-dressed, and well-spoken, and capable of garnering interest from the menfolk readily enough. Acknowledging that, however, in terms of retention, we sometimes end up burning men out with our sheer intensity. I believe that men prefer a more dependent type of woman. It makes them feel more secure, macho, chivalrous, in control, and manly. I assert this as a result of an informal survey; I just asked a table of guys to weigh in, and they all agreed. As I write this, I wistfully hope that somebody will respond in the space below, even argue with me, not let me get away with this Ruth-ish Morris-ism. But alas.

So, cheers to those of us who have spent a life of creating circumstances for ourselves. Kudos to those who have sculpted our own careers and education. Hurray for putting ourselves in the right positions to meet partners, and throwing parties for ourselves, literally and figuratively. We’ve worked hard for every promotion and accolade we may (or may not) receive, and without that tap on the shoulder saying, “This one’s for you.” Will we lose our gumption, our chutzpah, our mojo…if we ever see the way to hanging back and just letting “karma” happen?