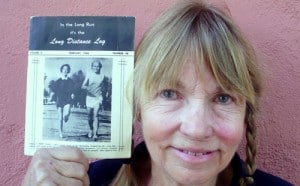 Last year, according to Running USA, women made up 42 percent of marathon finishers. But through the 1960s, female runners weren’t allowed to compete in anything longer than 880 meters. The first sign of change came not in Boston or New York, but in Culver City, 50 years ago Monday.

Back then, male race officials said running long distances would hurt women’s ovaries. Merry Lepper smiled when we talked about it in Culver City a few days ago. “I really had to laugh about that,” she said, “because I was hearing the reason that men gave that women couldn’t drive automobiles in Saudi Arabia was that it would hurt their ovaries. Whose ovaries are they!?”

According to KPCC, Lepper is an unheralded pioneer in women’s athletics. In 1963, she was a 20-year-old community college student who loved running long distances. “I’m not a very fast runner,” she said. “So for me, the distance races were a place where I could run slow.”

Lepper’s running partner was her friend Lyn Carman, and her coach was Lyn’s husband, the late Bob Carman, a renowned marathoner. Bob and Lyn had a plan: Lyn would become the first U.S. woman to run a marathon.

Sports historian David Davis, who discovered the story and wrote about it in a Kindle long-read called “Marathon Crasher,” says the race they planned to have Lyn crash was Culver City’s annual marathon. “It was called the Western Hemisphere Marathon. Actually started in the late ’40s … and it was probably ranked second or third behind Boston as the preeminent marathon in the United States and certainly the biggest one on the West Coast.”

Lepper picks up the story: “Lyn had been talking about running in it, and when we went to races we always went together. We were ready for it. We’d been running with the guys. We’d been out running 25 miles every Sunday for a couple of months. We were ready, and she was intending to do that, so I went along.”

So on Dec. 16, 1963, Lepper and Lyn Carman showed up at the starting line in Culver City. Lyn says they didn’t get a warm reception: “Before the race, there was one official who spent about 20 minutes chewing me out, saying I’d never be able to have babies again. He said the men would be disqualified if we ran, and he gave me a bit of hell.”

The men started, then Lyn Carman and Lepper. Lepper had a hard time finding her stride, so Lyn went ahead. Lepper almost got hit by a car at one point, and she rested on the curb for a bit, but eventually she got back into it.

I was just running along, feeling comfortable, and I didn’t catch Lyn until about mile 20, and I was thinking, “Oh, nice here she is now we can run together.” And as soon as I got up there, she said, “Oh, I feel terrible. I can’t do this. I’m just not feeling good today.” And she said, “I’m quitting.” I said, “You can’t quit!” So I went on by myself.

She finished with a time of 3:37:07, which immediately became the world record for women.

Except the world didn’t see the importance of Lepper’s achievement. Maybe it was still too focused on her ovaries. It took the Boston Marathon nine more years to allow women, and the Olympics didn’t see the light until 1984 in Los Angeles, when Joan Benoit won the first women’s Olympic marathon.

Lepper was honored at the Culver City Council meeting on Dec. 9 for her achievements.