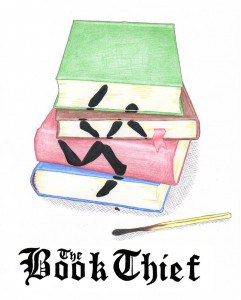 When my younger son was about to enter 9th grade, he was given a short list of book choices for his summer reading project. He couldn’t decide what to pick, so I took a look and found that one book, at least, appealed to me: it was set in WWII Germany. I took him to Barnes and Noble, and when I steered him to the book, he categorically refused any book that I would recommend, fearing that I was trying to shove yet more Jewish content down his throat. A few of his friends chose it, however, and seemed so engrossed, that I went back and bought THE BOOK THIEF for myself.

One of my favorite fiction books of all time, for its style, clear themes, and accessibility to a wide audience including children, I’ve been recommending it to countless students and their families for three years now. My son still hasn’t read it, but he went with me to see the film this week. He informed me that since he’s now seen the movie, for sure he won’t read the book; his loss! My students will be given extra credit before the end of the school year if they read the book AND see the movie, and analyze the differences between the two forms of media. The filmmakers explained to us why they had to make a certain few changes from the book, and I want to see my students detect this.

In the book, by Markus Zusak, I especially loved the literary devices used, from color symbolism to metaphors to personification. It is all about books and words and language. People expect a book or film set in WWII Germany to be about the Holocaust; this one is, yet it isn’t. A friend who saw it before me loved the film, especially the acting and cinematography, but complained that there wasn’t enough about the Jews, not enough “Holocaust” focus. People may say this if they haven’t read the book and observed how faithful the film actually is to it, and/or if they aren’t up on some of the new perspectives on the Holocaust itself.

The Holocaust is like an onion with never-ending peels of layers. We have survivor testimonies, fiction and non-fiction literature, memoirs, video footage, monuments and memorials, vistable sites, and tons of research available. Current thought is cognizant of the fact that the Holocaust might have been mitigated, or avoided altogether, if the majority of people in Germany, its conquests, and, yes, even its enemy countries (like the United States) had not stood by idly.

I did not see this story as the tale of the relatively few righteous gentiles, or of the plight of the Jews. It is rather a tale of what day-to-day life in Germany was like during the era, and how some people could have (I repeat: COULD HAVE) preserved their humanity through it all. Such tales need to be told, in order to approach understanding how NOT to allow more of man’s inhumanity to man to ever occur again.

A survivor in the audience took exception not just to the film, but the focus on any suffering that may have befallen the Germans during WWII. I tend to agree with such a perspective, and yelled out “amen” when he spoke. Having said that, I respect my German friends, and truly enjoy the country, which is very familiar and haimish (a Yiddish word that means “like home”) to me; I studied German for four years during and prior to my acquisition of Japanese, and have been there countless times. It’s just that Jews can be a little allergic to hearing too much about the “plight” of our perpetrators.

I disagree with that survivor, however, in that I do not think THE BOOK THIEF is about the perpetrators, OR the victims at all. Instead, I see it as a child’s perspective on how NOT to be a bystander. My students will vouch that, right along with my insistence on arts integration and enrichment/service opportunities for the gifted, I am, perhaps above all, an anti-bystanderism activist!

The day prior to seeing the film, I spent the day with a German friend in my age range, who told us how children after the war were lied to about family members’ roles during the Holocaust. As proactively repentant as Germany laudably has been, there is likely not a German family unscathed by the war, indeed, but more significantly, without a guilty Nazi perpetrator, or at the very least an active bystander.

In my discussions (with every ear I am able to bend) about what happened to Jews during The Holocaust, I am often asked why so many people did stand by, and why the Jews went along with the discrimination. Although the complicated nature of the events will not allow easy answers, ever, I would like to close by repeating a quote I heard at the Q&A session after the film: “If you try to kill frogs by throwing them in boiling water, they’ll jump out. But if you put them first in cold water, they’ll retain a sense of security, while the heat is gradually turned up.” As crass as the analogy is, I believe that is the way it happened. This reminds us that we all need to be on guard whenever we encounter conformist thinking, along with the inability to speak out about it or act against it.

Go see THE BOOK THIEF while it is still out in theatres (although unfortunately not in the wide distribution of the major-name chains – it is more of a Laemmle/Landmark kinda’ picture), and definitely read the book!

Let me take this opportunity to state that you are always welcome, no, encouraged, to comment on any assertions I may make in my articles by posting via the response mechanism below!