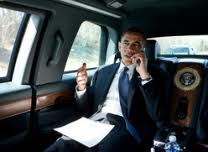 President Barack Obama is making his rounds in Los Angeles Monday and Tuesday, and according to laist.com, that can only mean one thing for Angelenos—Obamajam.

He’ll be arriving at LAX today to hit up two fundraising events, including the homes of basketball icon Magic Johnson and media proprietor Haim Saban. On Tuesday, Obama will be in Hancock Park early Tuesday morning for a fundraiser at the home of Friends co-creator Marta Kauffman, and then in Glendale for a talk at DreamWorks Animation, according to KABC and NBC Los Angeles.

These are the streets that will be potentially backed-up by Obama traffic:

4 p.m. to 5 p.m.: Obama’s plane will arrive at LAX. Surrounding streets around LAX airport will be blocked-off as he will most likely take a helicopter to Westwood.

4:45 p.m. to 10 p.m.: Street closures in Westwood and Beverly Hills, as well as the 405 Freeway to La Cienega Blvd. Santa Monica Blvd. to Venice Blvd. will also likely be backed-up.