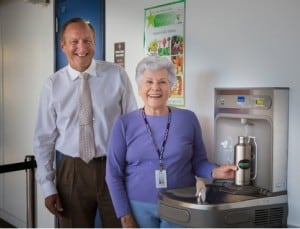 As soon as CCUSD’s new Hydration Station was installed in the high school cafeteria, the lines started to form to enjoy the chilled and very tasty water. Board Member Nancy Goldberg and Mike Reynolds, Assistant Superintendent, Business Services, (pictured) checked out the new station and waited patiently while students stood in line to get a nice cold drink.

Some used the regular fountains (there is an additional ADA-compliant version just to the right of the station in the photo) but several took advantage of the automatic filling feature of the station, which is controlled by an electronic “eye” built into the station. CCUSD is moving forward quickly to install an identical station in each school cafeteria over the next few weeks.

CCUSD is currently trying to get in line for state funding for the portion of the solar panels that have been constructed on the Farragut Elementary campus as the District has eligibility for a substantial amount of state money (somewhere around $570,825) that it may be able to obtain by virtue of our having placed the solar panels there.

CCUSD will be meeting soon with Balfour Beatty and the Robert Frost Auditorium architects, Hodgetts + Fung, to determine the cost for the three areas of specific improvements identified by H+F related to air handling, the back of the house, and the front of the house (stage improvements, etc.). CCUSD will be finalizing an agreement soon with H+F for that firm to provide the plans necessary for the evaluation of the anticipated individual costs of the three components in order to determine the optimum scope for the initial phase of the project.