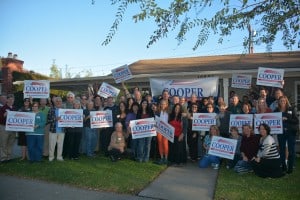 Nearly 100 supporters turned out yesterday to voice their endorsement of Mayor Jeff Cooper who is seeking re-election to a seat on the Culver City Council in the April, 2014 election.
Held at the Veterans Park home of Beverly and Dan O’Brien, the event drew supporters from a wide variety of political backgrounds and from every neighborhood in the city.
“It was gratifying that so many people from throughout the city gave up their Sunday afternoon to let me know that they would like to see me continue working for Culver City,” Cooper said. “Over the past four years, I have worked hard to protect neighborhoods and keep our city on firm financial footing, and I hope to continue those efforts for four more years.”
A nearly 25-year resident of Culver City, Jeff Cooper is a businessman and a community leader with a track record of fighting for Culver City’s neighborhoods.
As mayor, he led the charge to fight the dangerous practice of fracking, encouraging the State of California to put a moratorium on fracking until it develops guidelines that guarantee safety for our residents. Jeff took a leadership role in creating the city’s ban on single-use plastic bags. He helped lead the effort to create Tilden Terrace – a mixed-use and affordable housing project that, for the first time, allowed Culver City to fulfill its affordable housing requirement. He led the City Council effort to institute new measures to reduce cut-through traffic in Sunkist Park.
Cooper said he will hold his major fundraiser in February, but was using Sunday’s event to celebrate the beginning of the campaign.
“I am grateful for the support from all of those who took time out of their busy schedules to stop by and express their support. I appreciate each and every person who has pledged to volunteer throughout the campaign,” he said. “This campaign isn’t about me. It’s about moving our city forward and working together to address our challenges and to take advantage of the opportunities we have before us. In the wake of the loss of Redevelopment funds, we have to look for new and creative ways to spur economic development. We have to continue to enhance our efforts to be even greener as a city. We have to map out an achievable strategy to keep our city financially strong.”
Since his election in April of 2010, Cooper has spearheaded the effort to eliminate bullying on our parks and playgrounds and has worked hard to promote public safety, protect the environment and make sure City Hall listens when residents speak.
He voted to reduce the City Council’s own medical benefits, eliminating the decades-old policy of providing lifetime benefits to council members. He joined his fellow City Council members in renegotiating contracts with all city unions to reduce benefits and pensions – a move that saved our city millions of dollars at a time when every penny counts.

Cooper said he believes that the City should make public safety a top priority and joined the City in unveiling the State of California’s first Smart911 system – a technology that allows residents to give authorities a “safety profile” that will be displayed to 911 operators during an emergency. He has been a champion for the environment, pushing the city to continue its commitment to compressed natural gas (CNG) for our transportation fleet, redesign its fleet utilization and replacement program and earn the ranking as the No. 1 municipal transportation fleet in the country.
“I believe that, working together, we can make Culver City the best it can be,” Cooper said.