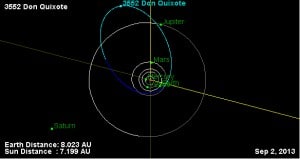 Things are not always what they seem—especially in space. For 30 years, a large near-Earth object called “Don Quixote” was believed to be an asteroid. Now, an international team of astronomers and planetary scientists has discovered it is actually a comet.

Called 3552 Don Quixote, the body is the third-largest near-Earth object (an asteroid or similar body orbiting the Sun in the vicinity of Earth). About 5 percent of near-Earth objects are thought to be “dead” comets that have shed all the water and carbon dioxide in the form of ice that give them their coma—a cloud surrounding the comet nucleus—and tail.

The team found that Don Quixote is neither. It is, in fact, an active comet, thus likely containing water ice and not just rocks. The finding, presented at the European Planetary Science Congress 2013 [www.epsc2013.eu] in London Sept. 10, could hold implications for the origin of water on Earth.

“Don Quixote has always been recognized as an oddball,” said team member Joshua Emery, assistant professor of Earth and planetary sciences at the University of Tennessee, Knoxville. “Its orbit brings it close to Earth, but also takes it way out past Jupiter. Such a vast orbit is similar to a comet’s, not an asteroid’s, which tend to be more circular—so people thought it was one that had shed all its ice deposits.”

Using the Spitzer Space Telescope, the team reexamined images of Don Quixote from 2009 when it was in the part of its orbit closest to the Sun, and found it actually did have a coma and a faint tail.

“The power of the Spitzer telescope allowed us to spot the coma and tail, which was not possible using optical telescopes on the ground,” said Emery. “We now think this body contains a lot of ice—including carbon dioxide and/or carbon monoxide ice—rather than just being rocky.”

This discovery implies that carbon dioxide and water ice might be present within other near-Earth asteroids, as well. It also may have implications for the origins of water on Earth as comets may be the source of at least some of it, and the amount on Don Quixote represents about 100 billion tons of water—roughly the same amount that’s in Lake Tahoe.

FIRE AND ICE are the two opposites that meet when an icy comet approaches the Sun. The result can be a spectacular tail, as when Comet Halley approached us in 1910, or just an unheard sizzle, when all of a comet’s ice melts away on a too-close approach to the Sun. Comets are always unpredictable objects—comet discoverer David Levy likened them to cats, “because they have tails and they do what they want.”

“Fire and Ice” is also the title of my all-time favorite book on comets. Published in 1985 and still available from Amazon (authored by Roberta J.M. Olson and subtitled “A History of Comets in Art”), it holds a treasury of paintings, drawings, and descriptions of all the great comets that have stirred the imagination of mankind. Looking ahead to the holidays, the book would make a great gift to accompany the approach of Christmas comet ISON, which we hope will still brighten and become spectacular at that time.